SPOTLIGHT: Members of the First Church of Amherst Dress The Part

SPOTLIGHT: Members of the First Church of Amherst Dress The Part

While many people were stretching faux cobwebs across their hedges or applying ghoulish makeup to their faces last week, the members of First Congregational Church, UCC, Amherst were planning their garb for celebrating All Saints Day -- rather than Halloween.

Because Halloween fell on a Sunday this year -- the traditional time for local churches to celebrate All Saints -- a member joked that he would attend worship in costume.  That innocent remark got Pastor Vicki Kemper thinking.  If dressing up would get people, especially children, into church on Halloween day, then it could be a good idea.  She thought it might also be a great way for folks to learn about some of the "heroes" of the faith. 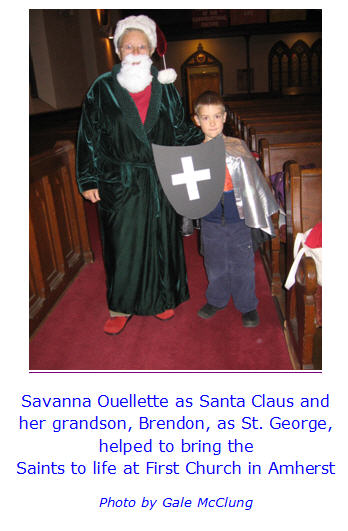 Kemper invited the congregation to dress as their favorite saints to celebrate All Saints Day, and later added a time during worship for dressed-up members to give a short explanation of who they were honoring and why.   Participation was better than expected.  Around 25 people shared in the activity.  Three people dressed as St. Francis of Assisi, patron saint of animals and the environment.  "St. Patrick" -- who brought Christianity to Ireland -- stood with "Santa Lucia" -- Italian patron saint of the blind, along with Joan of Arc, St. Augustine, and a young boy dressed as St. Bernard (the dog).
Other members represented less traditional saints. Maryelise Lamet, a historian who enjoys depicting the history of Martin Luther, not only dressed like "the honorary protestant saint" -- as she called him -- but brought with her a copy of the Ninety-Five Theses and taped it to the preaching lector where it hung during the rest of the service.
Kemper, who dressed as Mary Magdalene, preached about how we are all saints and that we are connected to one another and all the saints of the church, past and future, through Jesus.  "I encouraged members to interpret the saints very broadly," said Kemper.  "In our interpretation, saints did not have to be canonized in the Catholic church; they could be the saints of our lives."
One person wore a headband and brought a tennis racquet because he wanted to honor a church member who died and had liked playing tennis.  A woman wore several scarves in memory of a church member who really liked scarves. Someone dressed in her mother's hat and said she thought her mother had lived a saintly life. "People loved seeing the range of things, some elaborate and some very simple.  But the ones who represented people in the community whom we had known and loved were much more moving and appreciated in a deeper way," said Kemper.
"It really brought the day to life," said Lamet.  "It caused people to think about what being saintly was. It makes it more real, and we welcomed it."
In fact, Lamet's husband Sterling, also a historian, came as St. Nicholas of Turkey, the bishop-turned-folk legend.  Coincidentally, Santa Claus had also arrived on All Saints Eve at First Church.  "It worked for us because we take our faith very seriously but we don't take ourselves too seriously," said Kemper.   "This event demonstrated that worship can be fun.  It doesn't have to be a solemn, serious, heavy thing; it's a celebration and we were able to embody that."
Another highlight of the service was the choir's spirited rendition of "I Sing a Song of the Saints of God," arranged by Dick Matteson, the church's minister of music. "In the context of costumes and the sermon reminding us that we're all called to be saints, the song took on a much more personal meaning for everyone," she said.
Kemper believes this little-planned event will become a tradition.  "We are a church who likes to have fun and we have a lot of creative people." She said.  "It may not work for all churches but it was wonderful for us."
Maybe next year, the participants will all go marching in.
The Reverend Vicki Kemper, Pastor, can be reached at the church office at 413-253-3456  or pastor_firstchurch_amherst@comcast.net.