SPOTLIGHT: Did You Hear the Story about the Local Pastor Who ....

SPOTLIGHT: Did You Hear the Story about the Local Pastor Who ....

A rabbi, a muslim, and the senior pastor of the Church of Christ, Congregational, in Millis, Massachusetts, walk into a bar.  Well, technically, they walked into a synagogue; but the minister had previously performed at a nightclub.  That's no joke. 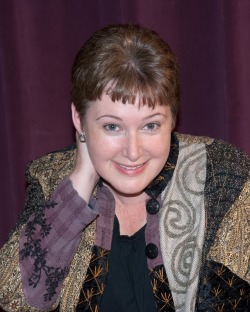 During this past year, The Rev. Jen Munroe-Nathans has been performing her comedy act at a variety of locations in New England, including a debut at the well-known Catch a Rising Star comedy club.  But in September, she took her act to Westport, Rhode Island, where she joined Bob Alper and Mo Amer -- a rabbi and a Palestinian Muslim -- in a "Laugh in Peace Comedy Tour."

The interfaith comedy event was open to the entire community and generated proceeds for the local charitable work of Temple Israel.  No fundraisers for her own church are planned, but she is open to doing some in the future and is available to help out other local UCC churches.

In her act, Munroe-Nathans jokes about family, friends, and even church moments -- like the time she tried to act 'cool' with the teenagers of the church and jumped into their conversation.  To her embarrassment, their discussion about underdeveloped nations and the Kings of Leon was not about a current event, but about a rock band.  Or how she once performed a funeral service at a cemetery in the pouring rain, poised, unknowingly, under an umbrella with a tagline that read: "Ask me about Life Insurance."

About 18 members of the congregation have seen the act live -- a large group attended the interfaith event -- and Munroe-Nathans feels blessed that the congregation is supportive.  "It might not be what is normally expected of the pastor but they have embraced it and seem to understand my comedy work as both an expansion of my ministry and as something that I do purely for fun.  Another person might play on a softball team for recreation; I do stand-up comedy."

Andy Bolton, a member of the church, thought it was refreshing to see his pastor in that atmosphere.  "I went to the interfaith event to show my support, and it doesn't change my relationship between parishioner and pastor in any different way.  She's very respectful, and I respect her. I think it's nice to see a minister in a different type of setting and realize that pastors are people like us."

Bolton also appreciated Munroe-Nathans' performance.  "As a George Burns and Bob Hope fan, I found it enlightening and refreshening to have a comedy show that is tasteful, clean and very funny."

June Murphy, another member, said that Jen is a naturally funny person and it is an extension of her personality to express it through humor.  "At a time when so many concerning issues are happening in people's lives, and around the world, it's a stress-reliever to be able to laugh together.  If you can laugh together it's hard to have negative feelings.  It's a healthy thing to do, and we are all going to be better for it."

It is interesting that although Munroe-Nathans got into comedy to have something 'outside the church' to feed her soul,  it ended up fitting so naturally into her ministry that they merged in some surprising ways. "It can be a bit awkward at some of the comedy clubs because I obviously have no control over the other comics and their material," she said.  "But I do have a lot of fun hanging out with them after the shows.  We usually end up talking about faith and, yes, I've challenged a few folks to trust that they can be funny without breaking most of the Ten Commandments within a ten minute set.   At some of the places I'm known as the 'pastor comic' and find that people seek me out to talk about faith or ask me questions about the church after the show."

According to Munroe-Nathans, however, the real reward is having a roomful of people of different faiths laughing together. "Some people ask me how a church pastor can also be a comedian.  I think that, for me, my calling to ministry is also a calling to comedy.   When we laugh together we are naturally forming a community. My prayer is that we can all learn to laugh together."

You can reach Jen Munroe-Nathans at the church office at 508-376-5034 or email millisucc@msn.com.  You can see her performance schedule at http://www.jenmunroenathans.com/index.html.