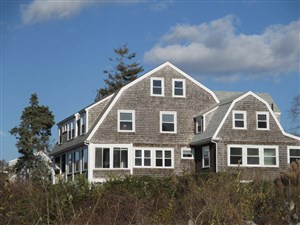 Delegates to the 216th Annual Meeting of the Massachusetts Conference on June 13 voted to authorize the Board of Directors to sell the two Conference-owned buildings at the Craigville Retreat Center.

It was also announced at the meeting that the owner of the majority of buildings and land at Craigville, the Christian Camp Meeting Association, has hired United Camps, Conferences and Retreats to manage the facility beginning Jan. 1, 2016.  (Read a press release regarding the new managers here.)

The Massachusetts Conference had been operating the Cape Cod facility since 1960. The Board of Directors voted last fall not to renew the lease, saying that operating a retreat center not used by most Conference churches was not within the core mission of the Conference, which is focused on nurturing vitality and covenant among local churches.

The Conference owns one guest house at the retreat center, called Minnie's Seaside Rest (shown in picture), and one staff house. Together, the two properties have an appraised value of $1.26 million. The Board has now received permission to sell the properties either outright or via  lease-purchase agreements.

Minnie's Seaside Rest was a restricted gift to the Conference from Wider Church Ministries of the United Church of Christ. In accordance with the gift restrictions, net proceeds from the sale of the guest house will be retained in a permanent endowment carrying the name “Minnie’s Seaside Rest”, the income to be used for Sustaining Pastoral Excellence.

Proceeds from the sale of the staff house will be used to pay the cost of any legally required upgrades (such as to septic systems) and to fund severance to be paid to the 25-member staff at Craigville. Proceeds in excess of these transitional needs will also be added to the Sustaining Pastoral Excellence Endowment Fund.