Your voice is urgently needed: Tell Congress & our Governor to welcome Syrian refugees!

Your voice is urgently needed: Tell Congress & our Governor to welcome Syrian refugees! 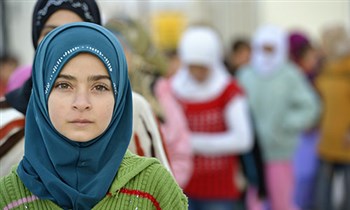 As people across the United States are donating to help Syrian refugees abroad and volunteering to welcome refugees in their communities, a number of governors, including Gov. Baker, recently announced that they want to stop their states from resettling Syrian refugees. We feel this is morally reprehensible and goes against everything for which the United States stands. Some members of Congress have even introduced legislation that would stop refugee resettlement altogether. It is critical that public officials hear from their constituents NOW as decisions are being made that will drastically impact the lives of Syrian refugees and refugee resettlement in the United States.

Here are some helpful points that you may want to mention, but the most important point is your story and why your community wants to welcome Syrian refugees! You can also tweet your Members of Congress and your network:
“.@REPRESENTATIVE, Our community is ready to welcome #Syrian #refugees. #RefugeesWelcome #AmericaWelcomes!"
Follow @RCUSA_DC on Twitter and “like” Refugee Council USA on Facebook for up-to-date alerts.