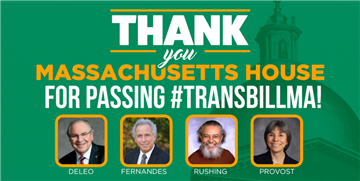 Today the Massachusetts House of Representatives passed HB 4343, the bill that would update state law to ensure explicit protections for transgender people in public places, including parks, restaurants, hospitals, and public restrooms. The bill also passed the Senate overwhelmingly and with bipartisan support on May 12. It now heads to conference committee to reconcile the two versions of the bill, and will then go to Governor Charlie Baker’s desk.

“We are thankful to Speaker DeLeo, Chairman Fernandes, Representative Rushing, and Representative Provost for their unwavering commitment to moving this bill forward and working diligently over the past months to be sure legislators did the right thing,” said Mason Dunn, co-chair of Freedom Massachusetts. “We are also thankful for all the legislators — Democrat and Republican — who voted in favor of the bill.”

Freedom Massachusetts has recruited and secured endorsements on the bill from more than 250 businesses, more than 350 clergy and congregations, 11 labor unions representing more than 750,000 families, 16 statewide women’s and victim’s advocacy groups, every major professional sports team in New England, the state’s leading law enforcement associations, the entire MA congressional delegation, the state attorney general, bipartisan leadership in the House and Senate, public endorsements from both the Senate President and the House Speaker, and more. Republican Governor Charlie Baker yesterday announced that he will sign a version of the bill when it reaches his desk. The bill’s lead sponsors in the House of Representatives are Byron Rushing and Denise Provost, along with Sonia Chang-Diaz in the Senate.

UCC OFFICERS, CLERGY AND LAY LEADERS IN SUPPORT
Many UCC’ers worked with various groups to reach lawmakers to support this bill, not just in this session, but also in campaigns of previous years. Clergy and faith leaders in the UCC and other traditions saw supporting this legislation as an act of faith. Mass Conference officers, clergy and staff joined Massachusetts Faith Leaders for Freedom and signed the Faith Leaders Pledge.