Raise Up Families, Raise Up Massachusetts

Raise Up Families, Raise Up Massachusetts

"Woe to him who builds his palace by unrighteousness, his upper rooms by injustice, making his countrymen work for nothing, not paying them for their labor." Jeremiah 22:13

People of faith are standing up for the dignity of families. In our land of abundance, too many hard working people are struggling to make ends meet. Raise Up Massachusetts is fighting to raise the minimum wage and require employers to offer earned sick time to all full time workers.

For nearly 1 million workers in Massachusetts, staying home to care for themselves or a sick child could mean losing their job. The ability for workers to care and provide for themselves and family members is a right, not a privilege, and now is the time to make it a reality for working families.

Raise Up Massachusetts is fighting to ensure earned sick time for workers across the state. Under our proposal, workers would be able to earn one hour of sick time for every 30 hours worked, up to 40 hours a year, so that they don't have to risk losing their jobs to care for themselves or their families.

Earned sick time is also good for business. Job retention policies like earned sick time reduce unemployment and strengthen the economy. When workers are able to earn sick time, it decreases employee turnover, limits the spread of illness at the workplace, and maximizes productivity. 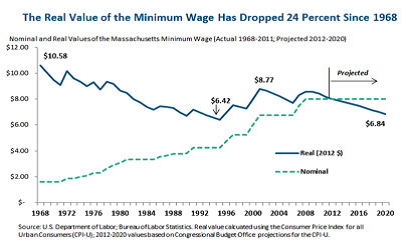 The minimum wage in Massachusetts has been stuck at $8 an hour since 2008, yet costs keep rising – and workers are long overdue for a raise. Families can’t afford the basic necessities, and it's an everyday struggle to put food on the table and keep a roof over their heads.

What can I do?

Organize a Signature Sabbath in your congregation. Across the state, congregations are hosting these events in October or November (before Nov. 20), on a weekend that fits their congregational schedule. Over 50 congregations are standing up for the dignity of our families through gathering signatures to increase the minimum wage and secure sick time for all full-time workers. These critical issues have stalled in the Legislature and we are seeking to put them on the 2014 ballot. The goal is for congregations to collect 30,000 signatures.

Organized by the Massachusetts Communities Action Network (www.mcan-pico.org), a member of PICO National Network, and endorsed by the Justice & Witness Council of the MACUCC