God Suffers When We Suffer

God Suffers When We Suffer 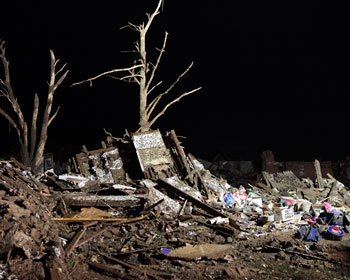 Early in the afternoon on May 20, an EF5 tornado, the largest recorded in U.S. history, moved slowly through my home state, with winds up to 300 mph, and creating a path of horror roughly a mile and a half wide. All tolled, somewhere between 13,000 to 15,000 homes were completely destroyed, flattened beyond recognition. Hundreds were injured, dozens died, many of them children.

The Plaza Towers Elementary School was one of the places where people were most concerned because many children were trapped inside the wreckage for almost two days. Thankfully, only nine children died, when it could have been many more, but each one was a child of God and loved by grieving parents. The death toll overall was amazingly low given the horrific destructiveness of the storm, but that's poor comfort to the families and friends of those who were lost.

For many years I lived with my family in Oklahoma City, down in the south west corner, right on the border with Moore. All of my (now grown) children went to Moore schools, and I called them this week to see how they were and tell them I loved them. They're all gone now, but I have two cousins who do live in the area. One of them lives in Norman, just below Moore, and she had the roof of her home blown off. She's now staying with her sister in Dallas. Another lived right in the center of the storm and she lost her entire home. Everything. The neighborhood looks like piles of firewood. She's now living with her aunt in another town several miles away.