Presented by the Commission for Mission and Justice Ministries: 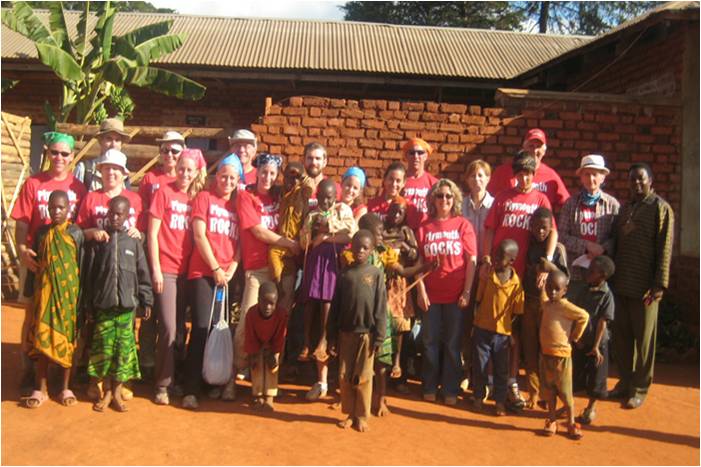 Africa Mission Group ~ Plymouth Church in Framingham
The Africa Mission Group has been instrumental in the establishment of 23 fresh water wells in Pommern, Tanzania and the surrounding area since 2008. Through their work, the lives of thousands of Tanzanians have been made easier and healthier because of access to fresh water. During a mission trip to Tanzania in 2007 by 17 members of Plymouth Church led by Rev. Peter Cook and Bob Ahearn, a friend of the church, the group recognized the villager’s need for fresh water; villagers received their water from a stream, a long walk from the village. In the fall of 2008, Rev. Cook arranged to bring 12 members of the Pommern Village Choir to Framingham for a cultural exchange and to share their music, culture and stories with church and civic communities. Aided by a Plymouth Church member, the choir made a CD of their music, “Song for Fresh Water”. By the time they left for home, enough money had been raised to drill 10 fresh water wells there. The Kilolo Vocational School in Pommern now trains young Tanzanians, including a group of young women orphaned as children, to drill new wells. 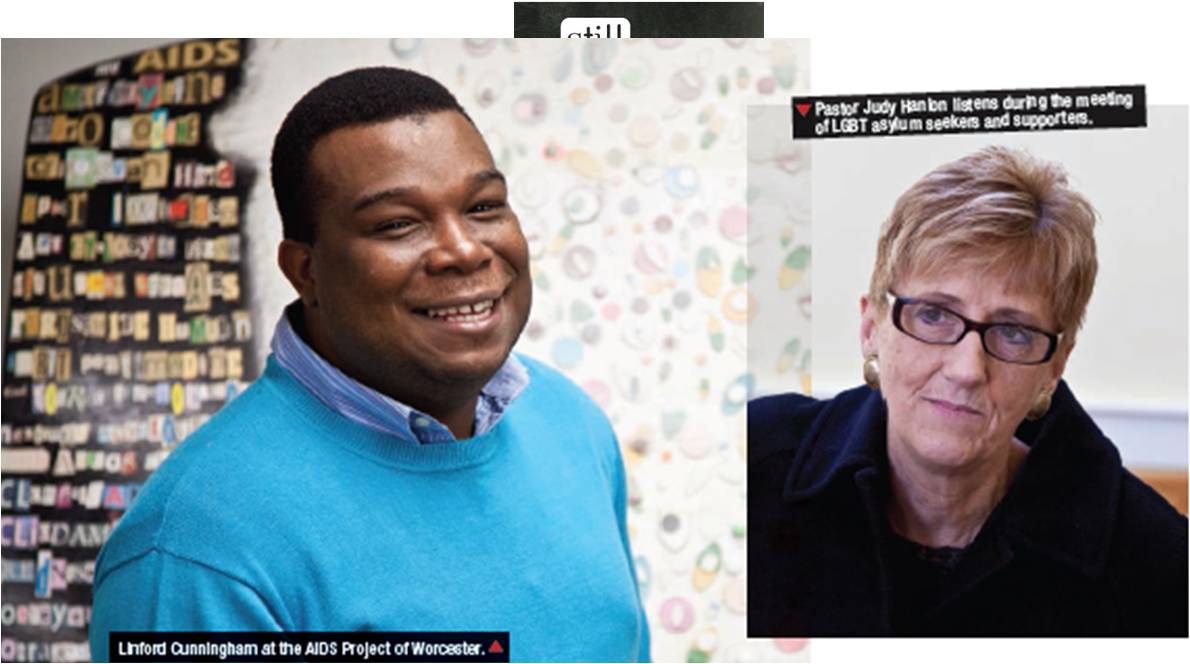 LGBT Asylum Support Task Force ~ Hadwen Park Congregational Church in Worcester
The LGBT political asylum support Task Force is doing raw and essential social justice work internationally. When LGBT persons flee their homeland because of oppression due to their sexual orientation, they usually arrive in the USA without resources. Once here and lacking a green card, it is illegal for them to work. They are unable to go to their own ethnic community here as that community is most likely quite homophobic as well. In addition, if their sexuality is discovered in America, their fellow countrypersons could cause harassment of the asylum seeker’s family back home. The LGBT Task Force pays for food and housing for these individuals, helps them find psycho-social support, and provides a cell phone to communicate with their attorney here as well as anyone back home with whom they need to stay in touch. The task force provides rides to doctors’ appointments, counseling sessions, finger-printing appointments in Boston and multiple legal appointments to prepare their case. Pastor Judy Hanlon helps counsel those who have suffered religious abuse, whether they are Christian, Jewish or Muslim; religious abuse is a huge part of their pain. In the four years since the inception of this task force, two persons have achieved asylum AND permanent residence. Twelve have received asylum and are seeking permanent residence. The task force is currently supporting nine persons as they prepare their cases and await an immigration hearing. 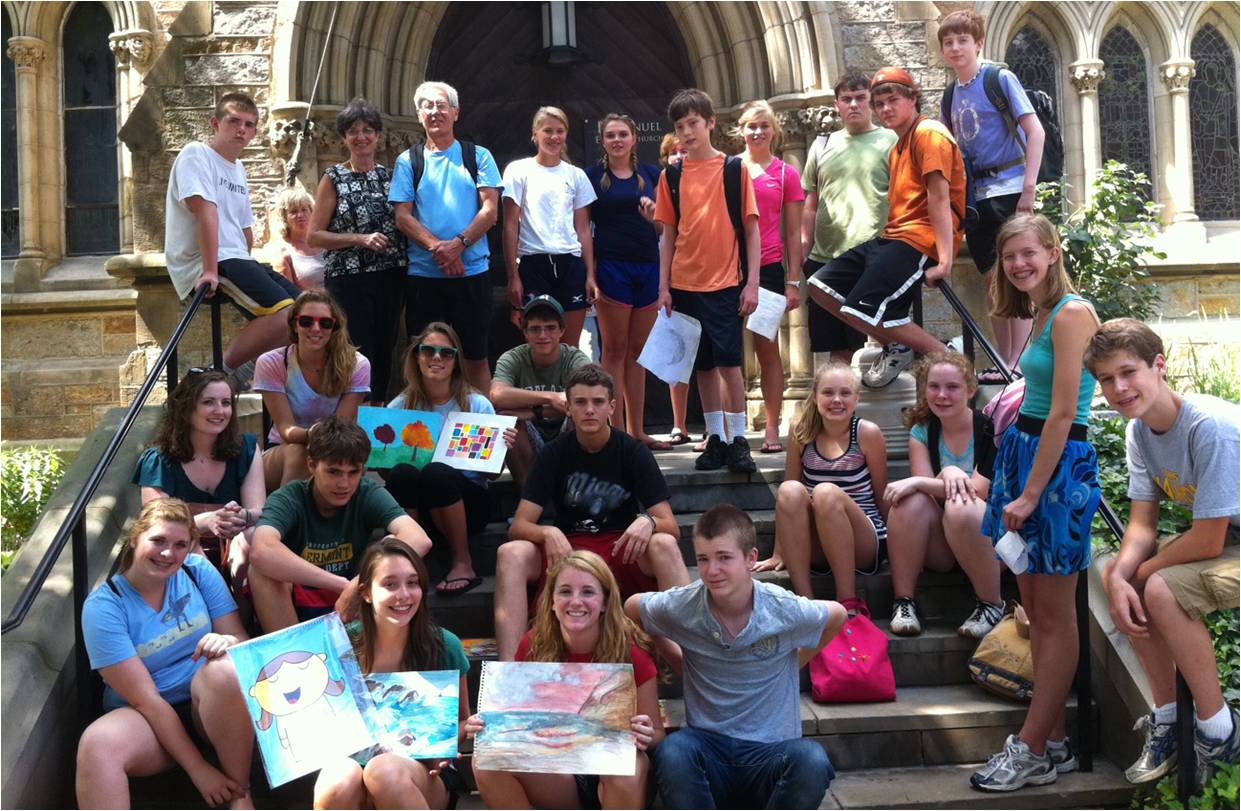 Summer of Service ~ South Church in Andover
During Summer of Service (SOS), a community service program for middle and high school youth at South Church, young participants engage in service projects for a total of 1,500 volunteer hours over three weeks. The program offers youth the opportunity to provide hands-on help to individuals in need - physically, mentally, and spiritually -working with organizations that seek, through their actions, to cause positive changes for individuals and families and to change underlying socio-political realities. Some of the projects include:
Neighbors In Need, Johnson’s Highland View Farm, Gaining Ground, Common Art, Rosie’s Place, Habitat for Humanity, Sabre Foundation, A Better Chance, Esperanza Academy, Giving Factory, Warehouse at Cradles to Crayons, Edgewood and Marland Place.
In addition to the vital work described above, the Summer of Service program develops youth to be leaders in the areas of charitable work and social justice. Youth who have completed tenth grade and who have previously participated in the SOS program are invited to apply to be counselors for the younger youth. They become passionate advocates for service work and spread their enthusiasm, acting as powerful role models and a living example of social justice and charity. By nurturing and empowering a life-long spirit of charitable giving and leadership in its youth, SOS can make positive, significant changes in the socio-political system. 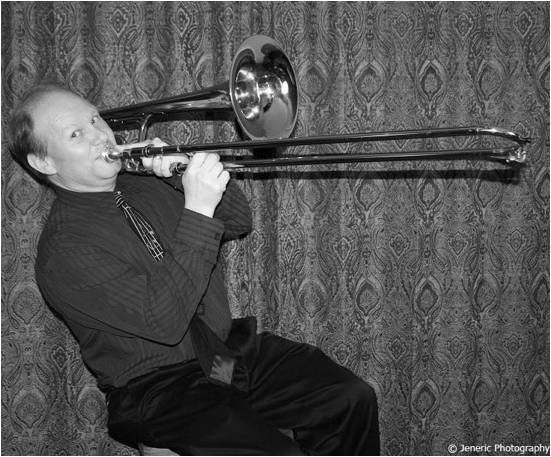 Adam Weber ~ United Parish of Lunenburg
Adam Weber embodies Jesus’ words found in Luke’s Gospel, “‘The Spirit of the Lord is upon me, because he has anointed me to bring good news to the poor. He has sent me to proclaim release to the captives and recovery of sight to the blind, to let the oppressed go free.” Adam has a quiet, selfless yet strong leadership style, firmly and faithfully based on example. He has been instrumental in the creation and growth of the Montachusett Interfaith Hospitality Network (MIHN), the area’s only safe refuge for homeless families. Adam has gently guided his congregation's participation in providing food and hosting services to the close to 100 families that have found a warm bed and compassion at the shelter located in Leominster. Most recently, Adam agreed to take on the role of Board President, and through his ability to lead by example is bringing the organization into its tenth year of service to the community.
In addition to MIHN, Adam’s leadership has been instrumental in other mission activities at the church, including:
Leading the Breakfast Club, a Christian formation group for middle/high school aged youths; developing youth involvement with Worcester Fellowship, which meets Sundays on Worcester Common; leading collections of close to $20,000 for Hurricane Katrina relief within days of the destruction, $10,000 for casitas de bendicion for sisters and brothers in Chile following the earthquakes and tsunami, and thousands of dollars for Haiti; and collections for Church World Service blankets, CWS Tools for Hope, Neighbors-in-Need, “White Gifts” for the Battered Women’s Resource Shelter, the recent youth delegation to the IPC and Cottage Hill Academy.

Rev. Gary Arndt ~ Former Pastor of Good Shepherd UCC, Metairie, LA
Though Gary did not serve a Massachusetts Conference Church, as the pastor of Good Shepherd UCC in Metairie, Louisiana, he was an active partner with numerous teams from Massachusetts Conference churches in their efforts to contribute to the rebuilding of New Orleans following Hurricane Katrina. Gary  was a graduate of Eden Theological Seminary and served as a UCC pastor for 35 years in Southern Illinois, Nebraska and Louisiana.

A spiritual director known for his sense of humor, Gary was instrumental in encouraging his parish to create safe, hospitable space for groups traveling to help in recovery efforts.  Gary helped us to see the spiritual and emotional impact of the trauma, touring the city with mission groups and providing the background to the causes of the flooding, the needs of the city and some of the ways we could be of support.  After retirement he continued his recovery ministry as an outreach coordinator for a locally based trucking company, and continued to organize volunteers to work in the schools and serve the needs of the community.

Through his connection with Worcester Area Mission Society, UCC and WAYS recovery trips, he inspired many Massachusetts Conference churches to engage in further mission and helped weave threads between our congregations that drew us into relationship with each other - sharing in worship, prayer, celebration and of course, fundraising and book collections for the work of the Good Shepherd UCC.

After a long battle with leukemia, Gary died at home surrounded by family, on April 27, 2012

Presented by the The Commission for Evangelism and Congregational Vitality:

Pastor Danneza Torez, Hispanic New Church Start
Dennaza is married to Marco and has two teenage sons, Marco and Diego. She was introduced to Pastor Cesar and Lisa De Paz who were starting the Hispanic New Church Start in Lowell. Under the supervision and guidance of Pastor Cesar and the Andover Association, Denneza eventually received her Pastor’s license on January 6, 2011. Today, she is the Pastor of Iglesia Hi,spana de La Comunidad De Lowell Mass. After a slow start, this growing church has made an impact in the city of Lowell because of the great work they are doing with the Youth. Through the leadership of Danneza and the transformation experienced by the youth, probation officers, lawyers and schools began to notice. These community workers started sending at risk youth to the church and together positive change is happening, not only in the lives of the youth but their families. Dennza says, “God has given me this blessing in working and guiding this group of forty to fifty kids and many of their family members in the love of God, the scriptures and the desire for each of them to embrace a positive future and a hope.”

Reverend Armand Proulx, Congregational Vitality: Resurrection
Armand has served at Second Church Greenfield since 2004. Armand will retire in August at the young age of 82.  In 2000-2004, the church discerned that it had “hit bottom,” However, they concluded “resurrection is central to their faith. Armand’s focus has been the development of the spiritual life, especially through Centering Prayer: believing that it is from the wellspring of prayer, the church is empowered to serve the community in works of charity and justice. Through prayer and practice this community, pastor and members alike, began to see evidence of resurrection and new life. They became a focused Church in faith formation, leadership development and prophetic witness. They attribute this new witness to: the Unbind the Gospel process l Five prayer groups meeting weeklyl Monthly healing servicesl Retreats/workshops featuring, in person or in their works, Keating, Bourgeault, Schaper, Borg, Nouwen, etc.lStrong interfaith thrust lSuccessful ONA status lParticipation in “greening” issues l Bread of Life projectl Community Meals twice a week l Homelessness-to-housing ministryl Mid-day opening of our doors (Mon/Fri) and Children’s Festivals. These practices have resulted new Constitution and Bylaws and best of all,  a recent surge in numbers of children and new people at church and a growing membership. For the rest of the story, come and see!

Reverend Jean Nevin Lenk, Discipleship and Evangelism
Jean is passionate about fulfilling Christ’s Great Commission to “Go… and make disciples” [Matthew 28:19] and leads workshops on the subject around the conference. “Discipleship is a model of Church for the 21st Century,” Jean states. “Notice I don’t say a new model of church. In fact, discipleship is a very old model – going back to the Acts 2 church. The early church grew and spread in part because the first Christians focused on nurturing their relationship with God and with each other through spiritual practices. Unfortunately, these days many churches are pre-occupied with numbers and how to boost church attendance and the number of giving units.” She helps churches move from a “membership model,” in which the focus is on getting and keeping members, to a “discipleship model,” in which the focus is on helping people experience the transforming grace of God. Jean has served as pastor at the First Congregational Church of Stoughton for the past seven years. She is currently on the Pilgrim Association Church and Ministry Committee and the MACUCC Evangelism and Church Vitality Commission. She previously served as Moderator of the Pilgrim Association and as a Massachusetts Conference delegate to the 2003, 2009 and 2011 General Synods.