The Rev. Linda Jaramillo, Executive Minister for Justice & Witness Ministries of the United Church of Christ and The Rev. John L.
McCullough, president and CEO of Church World Service, have released the following statement: 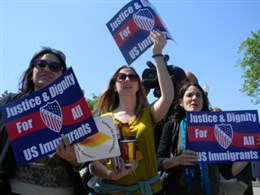 Justice delayed is justice denied. Last July, we stood in front of the White House with 112 clergy and immigrant leaders in civil disobedience to tell President Barack Obama that we could not wait for relief from deportation any longer.

After continued delays from the administration, relief from deportations for immigrant families is once again delayed – this time by the courts. Motivated more by political ambition than the common good, state governors and attorney generals have used the courts as a platform to attack immigrant families by suing the administration. This has resulted in an injunction that experts say is out of step with mainstream legal thought on presidential authority and the exercise of prosecutorial discretion. And we also should not forget that the president only acted after it was abundantly clear that House Republican leaders effectively killed any hope of commonsense immigration reform despite broad support by the American people.

As the court case moves to the Fifth Circuit Court of Appeals this week, Church World Service and the United Church of Christ signed onto an amicus brief with 17 other faith-based organizations and congregations. We filed this friend-of-the-court brief because of the harm this injunction has caused to millions of immigrant families – who continue to live in limbo and fear of deportation – and the impact on our own organizations. Many of our faith communities and refugee resettlement offices have spent months preparing legal services for the implementation of Deferred Action for Parents of Americans and Lawful Permanent Residents (DAPA) and expanded Deferred Action for Childhood Arrival (DACA).   Read the entire article in The Hill.