Our Story and Our Ministries

This ministry was initiated by the invitation of the late Rev. Jean Dorisca, the pastor of the Mission Evangelique Baptiste Bethesda (MEBB) churches in Haiti.  Rev. Dorisca was in RI visiting his daughter Rose Desilus and met Rev. Hayes at a church service.  This was the beginning of a long-term friendship and partnership which has expanded into many programs which continue to this day.  The medical clinic is a very significant part of this relationship.

During the 1990s, groups raised funds and made mission trips to Haiti to begin the construction of a large building to house both a church and school in Fontamara, Haiti.  It was Rev. Dorisca’s dream to keep expanding the building and its opportunities for the people living in that large community.

Another mission trip, primarily consisting of medical personnel, was made in November 1999.  Initially the group went to assess the availability of medical services in that community and to provide some very limited healthcare to the folks in the church.  However, that trip proved to be the beginning of medical services being developed right in that same compound of the church and school.  The group had brought some funds with them and, upon discussing the need for a clinic with Rev. Dorisca, met with a contractor to start the construction of an addition to that very large 100 by 150-foot building built into the side of a hill.

It wasn’t long before nurses and a part-time doctor and lab technician were hired to provide basic medical services to patients in the Fontamara community. The staff has increased in size a bit, but two of the original and very committed nurses, Elvie and Denise continue to provide services to the many patients each day.  The staff sees patients of all ages including newborns.  It is well situated to provide health exams for the school children as well.  Patients are referred to a higher level of care as needed.

The salaries of the medical staff have been supplemented by two of the churches in Rhode Island since the beginning.  Haitian crafts are brought back by members of each mission trip and sold locally to fund some of the money needed for the staff to buy medications for the patients.  Donations are always needed to help support the operation expenses of this very vital clinic that serves as a beacon of hope in this very densely populated community. 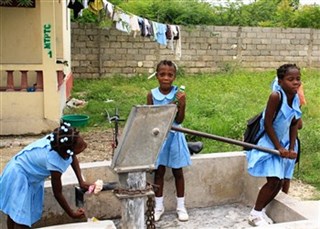 Another major health initiative of the Haiti Task Force is providing clean water to communities in Haiti. Access to potable water in Haiti is a vital need that the Task Force has been able to address over the years.  It is so necessary for drinking, cooking, bathing and the washing of clothes.  So many regions in Haiti are without good water which we, in the US, often take for granted.  Water typically has to be brought in from other areas and it is not unusual to see children carrying buckets of water very long distances to their homes before they start their school day. 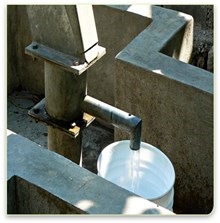 It has been amazing to see people from different churches raise funds to support the installation of water wells in areas in Haiti such as TiMarche, Archaie, Leferone, Gressier and Miragoane.  The cost typically ranges between $5,200 and $7,000 for each well, dependent on its location.  Groups and individuals are welcome to donate a portion or the entirety toward the cost to install additional wells.  This source of water supply makes such a difference in the health and welfare of the people in Haiti.

Any amount is truly appreciated!

Over the years the Haiti Task Force has:

Through all of this we have fostered a strong fellowship that brings the people of Haiti together with their Southern New England brothers and sisters in the truest meaning of loving one another.