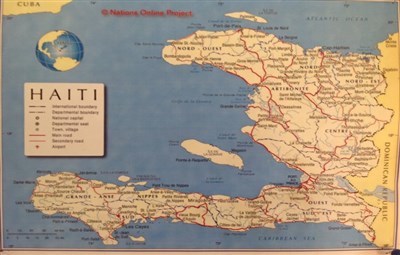 The Haiti Task Force was founded in 1990 when the late Rev. Dr. H. Daehler Hayes,  historic Rhode Island Conference Minister, partnered with The Rev. Jean Dorisca, the founder of the Mission Evangelique Baptitise Bethesda (MEBB) churches. (The organization was originally known as the Rhode Island Haiti Task Force UCC.)  Numerous groups have traveled to Haiti, and the Task Team continues today, more dedicated than ever to its mission.  Find out more about the Haiti Task Force.

CONASPEH Partnership was founded  In 1986 with a group of 50 pastors from very poor Protestant churches in Haiti, under the leadership of  Rev. Patrick Villier, working with Global Ministries (the mission arm of the United Church  of Christ and Disciples of Christ). Find out more about Conaspeh.

A Brief History of Haiti

The island of Hispaniola, modern day Haiti and Dominican Republic, has a complex and important history.  Christopher Columbus made landfall there on Christmas Day, 1492.  By 1510 King Ferdinand of Spain issued the first royal charter to import slaves to supplement the native Taino workforce which was being decimated by hunger, overwork, and introduced European diseases.

Mining gold mines were the first activity, later sugar and coffee plantations were the main source of wealth. Powered by slavery, Hispaniola became the richest colony in the world.  In 1697 the island was divided into the eastern Spanish, Santo Domingo portion, and the French St-Dominingue (Haiti) portion in the West.  By 1790, around half of the world’s sugar and coffee came from Haiti, and this accounted for 40% of France’s foreign trade.

Independence and freedom have always been in the DNA of Haitians. For example in 1779, 500 free black soldiers from Haiti fought the British army in Savannah, Georgia during the American War of Independence.

Following the storming of the Bastille in France in 1789, a successful revolt of the slaves began in Haiti.   On New Year’ Day 1804, Haiti became the world’s first Black republic and only successful slave revolt. The loss of income from Haiti was a major incentive for France to sell the Louisiana Purchase to America in 1803.  However, in 1825 France forced Haiti to pay 150 million francs in compensation for the French colonist’s losses during the revolution and to recognize their independence. This indemnity accounted to 10 times Haiti’s annual revenue, turning Haiti into a debtor country and diverting funds that normally would be spent on education, health care, and infrastructure. The United States did not recognize Haiti’s independence until 1862 during our civil war.

This history is known by most Haitians and is critical to the understanding of Haitians prioritizing their freedom.  Maybe we should not refer to Haiti as the “poorest country in the Western Hemisphere” but rather as the “world’s first Black republic formed by a successful slave revolt”. ~ Mark Pohlman