Photo Journey Through the Pandemic with First Church Amherst

Vicki has been part of the Amherst church for 13 1/2 years, as their Pastor. This church is known as a highly progressive and activist church. So much so, that they find that faith and spirituality is their ‘growing edge.’

In early 2017, First Church Amherst began considering issues of immigration justice, and by June of that year the congregation had decided by consensus to become an "immigrant-welcoming church." At the time, church leaders were clear that they were not seeking approval to become a sanctuary church; the church's building lacked a shower, and they were about to begin a major renovation project. Nevertheless, that September church members learned about a man facing deportation, and at an emergency congregational meeting, they chose to offer Lucio Perez sanctuary. Lucio took sanctuary in October 2017, and left sanctuary in March 2021.

When it came to worship, there was a video professional in the congregation. Vicki said, ‘you can do it for yourself for one 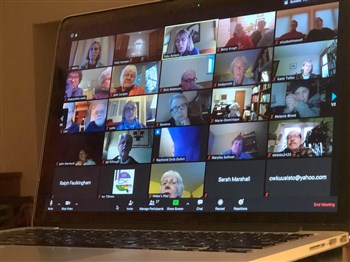 week and then suddenly the next week you'll be streaming live on YouTube or streaming from the Chapel with five other leaders.’ It was not fancy at all at first. Refining this took a lot of time.  All of the church meetings shifted to zoom and all of the weekly interactions in the church also shifted to zoom. One of the questions that the leadership wrestled with was, ‘how do we care for each other and how do we keep connection?’ The deacons would often check in with people by phone, letter, postcard, or email. Wednesday nights became a time for resume vespers. The soup kitchen at the church continued strong and didn't miss a meal at all. There were digital birthday parties and distanced farewells and other ways to reach out to people. A lot of concern was given to the neighbors of the church who were hurting.

One big thing the church did was that the leadership team gave away a large sum of money to area groups. The church has a governing board which is a team, and not a church council model. They gave away $27,000. 17,000 of this was for a group called Mutual Aid. They are a community network in the Holyoke and Springfield area. The reason for this choosing group was that people of color were struggling with the greatest needs in basic living expenses. The church also wanted to live out its anti-racist covenant. The other money was given to locally owned businesses that were able to set up microgrants. This came out to be about $10,000. Some people in the church had reservations about giving money to businesses but the consensus making process of the church was very helpful. All decisions in the church are made this way. The $27,000 was from 2014 when they had a fund of money set aside to be used for either peace or justice or compassion work. They had set aside this money as part of what they raised in their capital campaign.

In 2010, the church created its covenant to be an anti-racist church. The year before, in 2009, they worked through the Sacred Conversations’ program. This was the starting point for their anti-racist stances and work. It wasn't a controversy, but it created lots of good conversations and a lot of understanding came from it all. 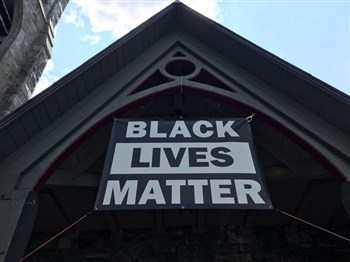 Black Lives Matter was a regular presence on the town common in the form of a weekly vigil. This was not hosted by the church but many people from the church were able to participate. Anti-racist work was part of sermons and worship throughout the pandemic.

Only one member of the church died of COVID. There were a few who died alone who were loosely connected to the church. They are still not sure if they have lost members as part of this pandemic.

As mentioned, faith and spirituality is the growing edge of this congregation because it has such a social justice-oriented view. Back in 1987 the church became Open and Affirming as well as a Just Peace church. They have given sermons during election time and spiritual grounding for such times. There's a pseudo-creed in their worship service that the people see as the ‘congregational mantra.’ They often say this while lighting a candle and passing the peace. Many of the older people of the church that do not have technology skills have lost out some. Some of the elders have done okay with the new technology changes.

The church moved its leadership from boards to teams 13 years ago now they have elected leadership teams. This includes the moderate are the treasurer, the clerk, etc. and all the other members are at large. They are not a representational body but a visioning body. This helps the church really live out its mission.