Add to my calendar 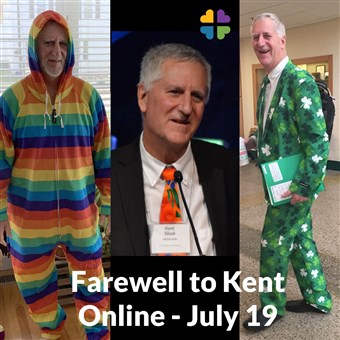 All are welcome to attend via Zoom.

Our program will include a service of release in addition to reflections and stories from Kent’s time in ministry in Southern New England.

Deb Blood – Maine Conference Minister and former Connecticut Board Chair
Deb Blood has known Kent since sometime in the late 90's, when she was a parishioner of the First Congregational Church in Essex, CT and he was Regional Minister. Their connections have continued through her In Care experience and the Colombia Partnership, then serving together when Deb was Chair of the Connecticut Conference Board of Directors. Most recently their friendship and colleagueship has continued on the Council of Conference Ministers.

Fredd Ward – Pastor, South Congregational Church, East Hartford CT and Former Connecticut Conference Moderator
The Rev. Fredd Ward has served as Senior Pastor of South Congregational Church in East Hartford since June, 2017.  Prior to his current role, he served as Associate Pastor for ten years at the Congregational Church of Naugatuck.  His term as Moderator of the historic Connecticut Conference concluded last December.  He also served in the national setting of the United Church of Christ for six years as Co-Chair of the Justice and Witness Ministries Board of Directors and as a JWM representative to the Executive Council.

Campbell Lovett – Consulting Conference Minister of the South Central Conference.
Campbell has known Kent since they were students together at Yale Divinity School in the early 1980’s.They were CT colleagues for many years - first in what used to be called the Summer Assistant Pastor’s Program (Kent in Brookfield and Campbell in West Hartford), and then in their first churches - Kent in N. Guilford and Campbell in Waterbury and New Haven. Finally, they overlapped as Conference Ministers, Kent in FL/CT and Campbell in Michigan. During their time in CT they were in a colleague group together. Their spouses and children have been friends over the years.

Ed Davis – Southern Conference Minister
Rev. Dr. Edward Davis serves as the Conference Minister of the Southern Conference, United Church of Christ which covers the State of North Carolina and the State of Virginia from Richmond to Virginia Beach.  They have nearly 200 congregations and we have the largest amount of African American churches in the United Church of Christ.  He has served  on the Cabinet of the Council of Conference Ministers with Kent.  He has had the pleasure of knowing Kent for over the past 13 years.  And, he has had the privilege of traveling with Kent in the Middle East on a couple of occasions.

Register here to attend via Zoom