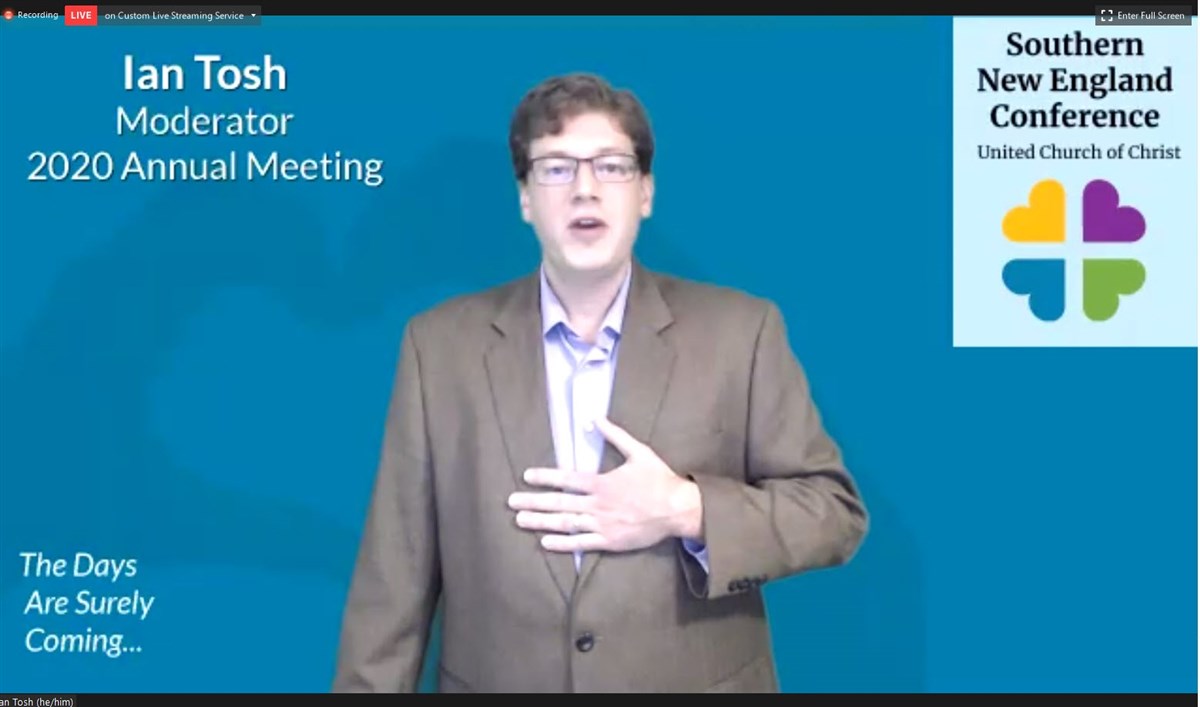 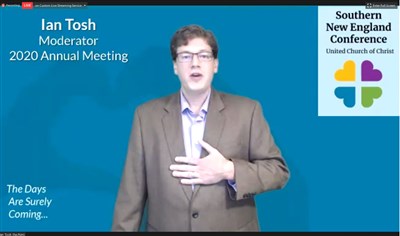 The Annual Meeting for the Southern New England Conference of the United Church of Christ was held on September 26th remotely via a Zoom webinar.  I moderated the meeting and have received some questions about my setup, and I offer details here.  One thing to know is that in my professional life I am an instructional technologist and spend a lot of time working in Zoom and thinking about technology.  Teaching is not the same as preaching, but if you all have follow up questions I would be happy to talk over your own technical setups for worship.  I love this stuff.

Working with a team:
While talking and moving from piece to piece as the agenda or spirit moves, it was so important to have others doing most of the technical orchestration of the event.  Tiffany Vail, Drew Page, Dawn Hammond, as well as members of the business committee, Board of Directors, and others, kept an eye on everything in the meeting, and really made it all happen.  As a co-host of the webinar, Drew queued up and played the videos and music by sharing his screen. As host, Tiffany ran the polling and spotlighted speakers, and others were looking at the chat and encouraging good behavior, or monitoring the Q&A.  Dawn prepared a minute by minute schedule that we all used to keep in sync, and we used texting as a back channel when needed as well as another Zoom meeting open for the business team to be in constant contact, if needed. Drew played all the videos from files stored on his computer because streaming them into Zoom from a service, and then resending them out through Zoom, would have stressed the bandwidth and might have caused delays. Backups for each video lived with Tiffany at a separate location, and backup recordings of most of the speakers were ready to go if there were network issues.

The team for this kind of event is by far the most important element. Tiffany and Drew and I met via Zoom the day before to run every technical transition, practice voting, and look over the script.

Host Setup:
Tiffany hosted the Zoom webinar on her laptop, where she ran the voting through Zoom's polling feature, and where she could unmute anyone with a question and monitor the Q&A and chat windows. She could also make sure all the panelists were online and ready to go as needed.

"For the most part, I set the webinar to show 'speaker view' so that attendees would be looking at whichever panelist was speaking, and not at the full array of people," Tiffany said. "The one time I changed this up was for the Q&A session with the Rev. Darrell Goodwin. For that, I spotlighted Rev. Goodwin and the three questioners, so all four would be on the screen together. This worked for attendees who had updated to the latest version of Zoom; anyone on an old version may have continued to only see the speaker view."

Tiffany had a second monitor that she used to have screen shares ready to go, and to access the Zoom web interface if needed.  She had her phone handy for texts from the business committee, Drew and Ian.

She also had a second computer set up on which she logged in as an attendee.

"What you see on your screen as the host or panelist of a webinar is very different from what the attendees see," she said. "I wanted to make sure attendees were seeing everything correctly, and the second computer allowed me to keep an eye on that. It was also a backup should something go wrong with my laptop."

Moderator Setup:
The space I had in my home is my basement.  I have a computer (Mac) that feeds into two monitors, a standard webcam, and a BlueYeti microphone.  I used a wireless mouse and keyboard for this session.  All of this resides on a desk, and for my purposes I have my monitors on floating arms allowing me to raise and lower them as needed.  I also setup a green screen behind me which came in very handy.

Monitors:
I use two monitors to allow me to have maximum real estate to setup various windows as I need them.  I decided that I wanted to stand, mostly for my own comfort, but also because it allowed me flexibility of movement, and is most similar to how I normally lead a large meeting.  My camera is almost centered on top of one of my monitors, which I think of as my main monitor.  I also elevated this monitor as much as possible to put it at my eye level.

I setup my script to be at the top of my main monitor, with the Zoom meeting window directly below in the bottom half.  I knew that I would be looking at my script and wanted that as close as possible to my camera.  Standing also put me some distance from the screen, so that even a close eye line would look like I was looking at the “audience.”  Moving away from the screen really helps with this.

In the Zoom window I had video for the other panelists which helped me to know if the next person to speak was ready.  I could also see both the chat and the list of attendees.  This list allowed me to know who had their hand up and who was unmuted and ready to speak.  The chat was good to read over to know who was engaged and how things were going, although I did not use this while speaking very much, as it is distracting.

On my secondary monitor, I could see the Q&A box as questions and motions came in.  I also had my Zoom settings window open so I could change my backgrounds, and the polls window so that I could see how votes were going as they came in.  I intentionally made my desktop a solid back, to minimize the light generated by the monitors.

Backgrounds and Lighting:
I had a green screen setup behind me so that I could use a virtual background. This gave me some control over what was seen, and it allowed me to bring up different information for different parts of the meeting.

You may have noticed that each vote we took was indicated over my right shoulder.  This was subtle, but I think it helped keep us on track.  To be honest I found it difficult to remember to change the backgrounds, so this was out of date at times.  I experimented with various programs to remove the green screen and replace it with the slides.  In the end the built in Zoom green screen mode worked best.  I was very impressed with the quality of this chroma key.  My glasses, and even a glass of water was handled really well, without having to stress about the lighting, a usual concern when using a green screen.

Speaking of lighting.  I had one ceiling light, and two desk lights. That is all I used for lighting.  It was all very diffuse.  The two desk lamps (one pointed at the wall beside me and one pointed at the ceiling, just provided bounced light.  I had no direct lighting.  The green screen did not have its own light, it was just getting fill from everywhere, and I found I did not need a back light on me to pull a good key.

While I think this looked fine, I noticed that I was a little brighter than I wanted to be, problematically sometimes.  I think this was because my camera was auto adjusting to the whole image (including the large green screen) and because it was not lit the camera had to open up to get that at proper exposure, so I looked bright.  I did try lighting the green screen directly, but that created hotspots that ruined the chroma key.  In the end, me being over exposed was just what happened.  If doing it again I may have actually added some diffuse light behind the green screen.  The fabric I was using was like a sheet and would have lightened with a light shining through it.  This may have been enough to allow the camera to drop its gain, without creating hot spots.

Control:
I knew that I wanted to stand, and I knew that I needed my script to be large on my screen, and I like to talk with my hands.  I decided to use a wireless mouse with a scroll wheel to control everything.  So, for most of the meeting I held the mouse in my right hand, scrolling the wheel to advance my script.  On occasion I had to use a stack of tables to my right to move the mouse, to adjust my background, or select the poll window.  This worked really well and allowed me to look up the whole time, which I cannot do even when at a podium at a live meeting.

In the end I think it all worked well.  The spirit was allowed to move, and the technology held it all together.  We will do some things differently at our next meeting as we learned lessons from this one, but overall, I think this was a success.


Other notes from Tiffany:

Captioning:
The meeting planners felt it was very important to make captioning available for the meeting, so that anyone who had difficulty hearing the various speakers would be able to take part.  We accomplished this in two ways. Drew added captioning to all the pre-recorded videos, by both listening and using the scripts provided by the speakers. The decision was made not to add captions to the musical performances in the worship videos, out of fear that would be distracting. The lyrics were posted on the website, however, for anyone who wanted to follow along.  For the live speakers, the original plan was to hire a professional transcriber to type in captions live during the meeting. The service hired by the Conference, however, was unable to find someone to staff the event. That meant going to plan B, which was to use an automated service, Rev.com. This worked fairly well - the system promises 80% accuracy. One limitation, however, is that using this service uses Zoom's streaming capacity - the meeting is streamed out to a computer, and then the captions are streamed back in. That means this program cannot be used with a meeting that is also being streamed out to Facebook or YouTube. Fortunately, we had decided not to livestream this gathering, so that was not an issue.

Registration & Voting:
Just as is done for in-person meetings, it seemed important that both voting and non-voting participants be able to take part in the meeting together. But that raised the question of how to handle voting. We investigated using a voting app outside of Zoom, and only giving voting delegates access to that app. But we were fearful that it would be difficult for people to switch in and out Zoom during the meeting to access a separate app. We chose instead to use the Zoom polling feature. This allows us to download a report after the meeting showing how each attendee voted on each question. Should a vote have been close, we could refer to this report and remove any votes made by non-voting participants.  In order to get this report, we needed to register each attendee for the Zoom webinar, so that each person could have a unique link to attend the meeting, allowing Zoom to track their voting and participation. To accomplish that, we were able to take a spreadsheet of meeting registrations from our website and upload it to Zoom. Zoom then automatically sent the unique links to each person registered.