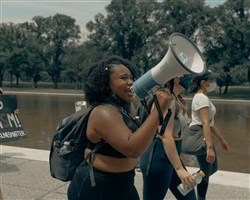 Environmental Justice Communities resources address setting aside our biases and privilege, so as to wholly support communities of color who are combatting the toxic intersection of environmental racism, poverty, voter suppression, and other related social justice issues

Center for Diversity and the Environment, seeks to harness creating an equitable, inclusive, diverse, and multi-cultural coalition of people to work on a wide array of environmental issues.

Sierra Club's, Hop Hopkins notes, "...Equity transformation doesn’t mean changing the face you show the world and keeping your heart the same. When you say you want equity in our society, it means you want a fundamentally different society..."  Read the article here.

ACE - Alternatives for the Community and the Environment, is a Roxbury, MA, based program in existence for 25 years.  Dedicated to environmental justice, ending displacement, improving public health and transit and youth leadership.

Decolonizing Environmentalism "is a collective that critically interrogates the intersections between racial capitalism, colonialism, and climate change to reimagine and transform the current environmental discourse.

The Wretched of the Earth is a grassroots collective for Indigenous, black, brown and diaspora groups and individuals demanding climate justice and acting in solidarity with our communities, both here in the UK and in the Global South.

Green America, People of color on the front lines of the climate crisis

Renew New England – Working to ensure that everyone in New England – Black, brown, and white, Indigenous and immigrant – has a dignified job with a livable wage, can afford a comfortable home and enough food, and can walk or play outside in clean air.

Partnership Model: Explore this Mission Paradigm Chart from Global Ministries to learn how to come alongside of environmental justice communities and follow their lead in taking action.

Consider using these reports to explore locations in your region where toxic wastes have been situated with their primary impact on environmental justice communities:  In 1987, the UCC’s Commission for Racial Justice published the first report to comprehensively demonstrate environmental racism across the nation with its report "Toxic Wastes and Race in the United States".  A 20th anniversary report took that research further in demonstrating that when facilities were clustered together in an area the likelihood of racial and economic disparities increased.

In 2020, a report entitled “Breath to the People: Sacred Air and Toxic Pollution” added another dimension of research by focusing on the children who live near polluting facilities and are particularly vulnerable toxic emissions.

Gonna Trouble the Water: Ecojustice, Water and Environmental Racism by Miguel de la Torre (Pilgrim Press) de-centers the concept of water as a commodity in order to consider the sacred nature of water and the ways in which it is weaponized against non-white communities. With compelling contributions from scholars and activists, politicians and theologians.

Read up on Links between Racism and the Environment (NY Times, Somini Sengupta, June 5, 2020)

Stop Line 3: Line 3 is a proposed pipeline expansion to bring nearly a million barrels of tar sands per day from Alberta, Canada to Superior, Wisconsin. It was proposed in 2014 by Enbridge, a Canadian pipeline company responsible for the largest inland oil spill in the US. Enbridge seeks to build a new pipeline corridor through untouched wetlands and the treaty territory of Anishinaabe peoples, through the Mississippi River headwaters to the shore of Lake Superior. For more information about Stop Line 3.