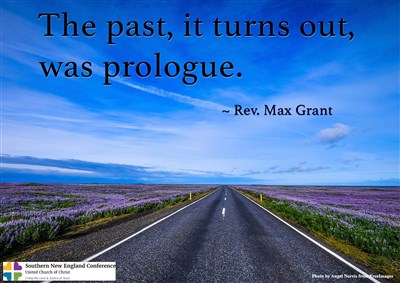 Then Jesus came from Galilee to John at the Jordan, to be baptized by him. John would have prevented him, saying, ‘I need to be baptized by you, and do you come to me?’ But Jesus answered him, ‘Let it be so now; for it is proper for us in this way to fulfil all righteousness.’ Then he consented. And when Jesus had been baptized, just as he came up from the water, suddenly the heavens were opened to him and he saw the Spirit of God descending like a dove and alighting on him. And a voice from heaven said, ‘This is my Son, the Beloved, with whom I am well pleased.’

The story of Jesus takes its biggest chronological leap this week, as Matthew moves from magi and the flight into Egypt of Jesus’ family, fast forwarding to the moment, perhaps some thirty years later, when Jesus presents himself for baptism in the Jordan — the beginning of what we might call his “public career.”

The past, it turns out, was prologue.

With our own enthusiasm for turning over a new leaf, beginning a new chapter, finding a new groove, or seeking a new adventure, we can be drawn to the courage for and the energy from change that radiate from this story of his baptism.

So many of us would like our past to be little more than prologue, too, hoping that there is still time enough for our particular vision of the future.  Some of us might well write our own stories as narratives with auspicious beginnings, followed by many years of blah blah blah. 30 years? Maybe.  Or maybe it was all blah blah blah until college (or after), or the kids came.

Along those lines, it’s easy to read this account of Jesus’ baptism as a story of him finally “finding himself,” naming and claiming his truth, or putting his past behind him, as if that’s what the actual miracle is — such that his gracious invitation to us in our baptisms, to find new life in him, is just another typically odd, Bibl-ish way of talking about self-actualization.

But if Christmas was about the chosen creatureliness of the divine, Baptism affirms the sacred rootedness of the creaturely. Let’s not shrink from the boldness of its claim that only through its lenses can divinity itself begin to be properly proclaimed.

This is far more than an invitation to follow Jesus’ example by going out and living our best lives.  It is saying that in baptism, what begins is not a new story, but the latest incarnation of an ancient one.   And it is in learning to see the signs of that ancient story finding expression in our own lives that we come to recognize the presence of God.

Holy One, thank you for the many ways that your abiding promises and your unyielding passion for justice find new expression in our times and in our lives.  May your baptism remind us of the promise of our own baptism, and give us eyes to see all that is sacred around us with eyes of love and hearts of commitment.  Amen.

We ask churches and church leaders to join us in the following prayers either by sharing them during worship, printing them in bulletins, or sharing them in some other way. To make a prayer request, please contact Drew Page at paged@sneucc.org.

January 7, 2015  (5 years ago) Twelve people are killed in the Charlie Hedbo offices in France, a French publication none for strictly secular views. The attack was believed to be a response to criticism of Islam and depictions of Muhammad. The world-wide divisive response ranged from condemnation for what was seen as a terrorist attack, to marches in support of free speech, to criticism of the magazines strict "left-wing, atheist" worldview. The magazine continued publishing with the next issue showing Muhammad with a tear in his eye and sign reading "Je suis Charlie" (I am Charlie).

The Rev. R. Maxwell Grant is pastor of the Second Congregational Church of Greenwich.