A reflection by the Rev. Jack Shackles, Jr.

When I was a Navy chaplain, I was invited to speak as a guest pastor during worship at a local church.  I arrived in uniform and was greeted by four well-dressed men at the front door of the church.  Thinking they were there to greet me, I smiled and spoke a word of greeting.  “What kind of Bible is that you carry?” one man sternly asked.  At that time, I carried a Bible that was not the King James Version.  The man told me I was not welcomed in that church, and I was to get in my car and leave the property immediately.

Another church invited me to arbitrate a serious conflict that had divided their church.  When I arrived, the angry members were separated by the center aisle.  One side was for putting basketball goals on both ends of the tennis court.  The other side was, of course, against the basketball goals.  Both sides had announced they would immediately leave the church if they did not get their way.

Some years ago, a church invited me to be a part of the discussion to consider the open and affirming issue.  At the first meeting, a man angrily read from his Bible verses which he believed denounced homosexuality.    He announced that there was no need to discuss an issue which was a sin against God, and he considered the meeting closed. 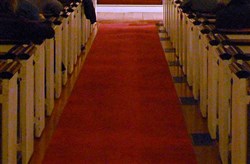 Divisiveness has been and continues to be an issue in our churches.  The subject that divides us can become more important than that which unites us.  Church leaders who choose to follow their own selfish motives become church bullies who trumpet their own cause and tear down or silence those who disagree.

When facing divisive issues in our church, we can instead choose to seek that which unites us.  It is the love of Christ and neighbor. We are called to a spiritual maturity that that is marked by “love, joy, peace, patience, kindness, goodness, faithfulness, gentleness, and self-control.”  We are called to do no harm to those whom Christ loves.  With God’s help, let it be so.

Gracious God, we have been called to be one in You, one in Christ, and one in your Spirit.  It is your grace that makes us one.  Forgive us when we choose that which divides us.  Forgive us when our selfishness brings harm to those you love.  We are your beloved. Continue to empower us to live as your beloved so that the world may know that we are one.