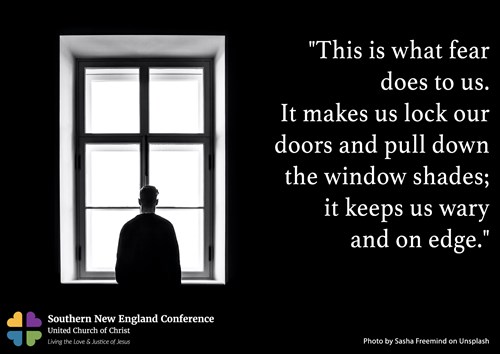 Rev. Timothy Haut has been the Pastor of the First Congregational Church (UCC) in Deep River, CT, for 42  years, and will celebrate 50 years of ordained ministry in the UCC this June. He has written a book entitled A Deep River Year,  writes poetry, bakes blue-ribbon pies, grows tomatoes, and has a one-eyed dog named Bug.

Jesus Appears to the Disciples

When it was evening on that day, the first day of the week, and the doors of the house where the disciples had met were locked for fear of the Jews, Jesus came and stood among them and said, ‘Peace be with you.’ After he said this, he showed them his hands and his side. Then the disciples rejoiced when they saw the Lord. Jesus said to them again, ‘Peace be with you. As the Father has sent me, so I send you.’ When he had said this, he breathed on them and said to them, ‘Receive the Holy Spirit. If you forgive the sins of any, they are forgiven them; if you retain the sins of any, they are retained.’

But Thomas (who was called the Twin), one of the twelve, was not with them when Jesus came. So the other disciples told him, ‘We have seen the Lord.’ But he said to them, ‘Unless I see the mark of the nails in his hands, and put my finger in the mark of the nails and my hand in his side, I will not believe.’

A week later his disciples were again in the house, and Thomas was with them. Although the doors were shut, Jesus came and stood among them and said, ‘Peace be with you.’ Then he said to Thomas, ‘Put your finger here and see my hands. Reach out your hand and put it in my side. Do not doubt but believe.’ Thomas answered him, ‘My Lord and my God!’ Jesus said to him, ‘Have you believed because you have seen me? Blessed are those who have not seen and yet have come to believe.’

The Purpose of This Book

Now Jesus did many other signs in the presence of his disciples, which are not written in this book. But these are written so that you may come to believe that Jesus is the Messiah, the Son of God, and that through believing you may have life in his name.

This familiar story of Jesus’ encounter with “Doubting Thomas” and the other disciples shortly after the resurrection begins on a somber note. We read that these friends of Jesus were together behind locked doors out of plain fear. They saw what had happened to the best man they had ever known, and they were not ready for it to happen to them, too.

This is what fear does to us. It makes us lock our doors and pull down the window shades; it keeps us wary and on edge. It turns us into suspicious cynics, trembling cowards, and cautious disciples. Fear can even poison any goodness in us and make us incapable of living with trust and love—even for the people closest to us. Much of the anger and hatred in the world rises out of our deep-seated fears. We see it among nations as well as the people down the street. We see it in ourselves, too, when jealousy or contempt erupts against people whom we have given the power to threaten or hurt us, or who pose a challenge to our preconceived notions and our comfortable way of life.

That’s the road on which those disciples were headed. Cowering behind the furniture, peeking out through closed curtains, muttering in whispered voices lest they be recognized as co-conspirators with Jesus, their fragile faith seemed precarious at best. But Jesus had other plans for them. He would not let locked doors or walls keep him out. He still doesn’t.

He comes with love enough to cast out all fear, to challenge us to come out into the fresh air of his grace where resurrection happens. Yes, there will be wounds and pains, he says, showing us the scars on his hands and his side. We can’t make it through this broken world without having our hearts broken, too. But, he promises, a deeper peace will encompass us. He says it three times in this Sunday’s Gospel. “Peace be with you.” It’s not a mere greeting or wish. It’s a proclamation, a gift, and a promise. Easter dares us to stop being afraid. It dares us into joy. It comes with a guarantee: “nothing in all creation can separate us from the love of God in Christ Jesus our Lord. “ (Romans 8:38)

Easter God, step through the locked doors of our hearts.  Surprise us by showing up when we least expect it.   And grant us your brave peace, so that believing, we may have life in your name.   Amen.

April 20, 1999 (23 years ago) Two teenage gunman enter Columbine High School and begin a killing a spree that killed 13 and wounded another 23. The teens, Dylan Klebold and Eric Harris, died by suicide in the attack. The shooting sparked national debate and left the Colorado town with long lasting scars. Despite the attention, very few measures have been placed to prevent similar shootings. The Washington Post found that since the Columbine shooting, there have been 10 school shooting each year on average in the United States.

is the pastor of the First Congregational Church in Deep River, keeper of an open gate.