This week marks nine years that Rev. Alison Patton has served as pastor of Saugatuck Congregational Church, UCC in Westport, CT. Her ministry includes participation in racial justice efforts in the town of Westport and with the SNEC. To feed body and spirit, she loves exploring the woods and coastline of southern Connecticut.

So he got up and went. Now there was an Ethiopian eunuch, a court official of the Candace, queen of the Ethiopians, in charge of her entire treasury. He had come to Jerusalem to worship and was returning home; seated in his chariot, he was reading the prophet Isaiah. Then the Spirit said to Philip, ‘Go over to this chariot and join it.’ So Philip ran up to it and heard him reading the prophet Isaiah. He asked, ‘Do you understand what you are reading?’ He replied, ‘How can I, unless someone guides me?’ And he invited Philip to get in and sit beside him. Now the passage of the scripture that he was reading was this:
‘Like a sheep he was led to the slaughter,
and like a lamb silent before its shearer,
so he does not open his mouth.
In his humiliation justice was denied him.
Who can describe his generation?
For his life is taken away from the earth.’
The eunuch asked Philip, ‘About whom, may I ask you, does the prophet say this, about himself or about someone else?’ Then Philip began to speak, and starting with this scripture, he proclaimed to him the good news about Jesus. As they were going along the road, they came to some water; and the eunuch said, ‘Look, here is water! What is to prevent me from being baptized?’ He commanded the chariot to stop, and both of them, Philip and the eunuch, went down into the water, and Philip baptized him. When they came up out of the water, the Spirit of the Lord snatched Philip away; the eunuch saw him no more, and went on his way rejoicing. But Philip found himself at Azotus, and as he was passing through the region, he proclaimed the good news to all the towns until he came to Caesarea.

What possessed the Ethiopian Eunuch to spend a lovely afternoon reading this passage? He could have been consuming a juicy mystery novel or a Jerusalem Times best seller. Instead, he pored over these verses: “In his humiliation, justice was denied him…”

Yes, he was a eunuch, castrated in his youth, so he may have known something about humiliation. Also, he was on his way back from the temple in Jerusalem and it is written right in the book of Deuteronomy that eunuchs are not permitted in the temple (Deut. 23:1). Here is a man who was devoted enough – and wealthy enough – to purchase his own copy of a prophetic scroll, and yet he would have been denied entry to the temple, that center of Jewish faith. Sounds a bit like justice denied.

Except, Deuteronomy doesn’t have the last word on this matter. Maybe that is why the Eunuch picked up an Isaiah scroll, among all the other sacred texts he might have obtained. Just a few verses after that bit about sheep and slaughter, in Isaiah 56, it reads, “To the eunuchs who keep my Sabbaths, who …hold fast my covenant, I will give a monument and a name better than sons and daughters…” (56:4-5). And later: “These I will bring to my holy mountain and make them joyful … for my house shall be called a house of prayer for all peoples.” (56:7).

This, I wager, is why the Ethiopian Eunuch asked Philip for help. Because he needed to know which text he was supposed to believe: Deuteronomy or Isaiah? Was he welcomed... or not? It’s a question that continues to plague would-be Christians, all kinds of people who have gotten mixed messages (in ways subtle and not so subtle), about whether we really belong in church, notwithstanding the big, friendly sign at the road that proclaims, “All Are Welcome.” Too often, there’s that pesky footnote that says, “Sure, come on in, unless you have a tattoo, or mutter to yourself during worship, or wear a red tie, or wear a blue tie, or can’t sit still for the length of a sermon, or know that you have been assigned the wrong gender, or otherwise don’t quite ‘fit in’…”

After that impromptu Bible study with Phillip, the Ethiopian Eunuch asked, “What is to prevent me from being baptized?” It sounds rhetorical, but it may well have been a genuine question. “IS there anything, anything at all to prevent me? Those verses in Deuteronomy, for example? Unresolved issues in the Wider Church? Your own uncertainty about whether I am in or out?” Philip’s answer, and Christ’s, was, “No. Not a thing.”

Christ, who knew the sting of shame, has no footnotes. In the spirit of Isaiah, Christ gathers all the people: folks of every gender and residents of every land; swaddled infants, inquisitive teens, and searching adults; people who walk and people who wheel; those who lead with their hearts and those who lead with their heads. All those who are drawn to the Sabbath are welcomed into Christ’s company - including us.

Together, we are invited to wade into the water, to be soaked through by the grace of God, and then to go on our way, dripping wet and rejoicing.

Help me to discover You not just in the pages of a book, but in the lives of your peoples. Amen 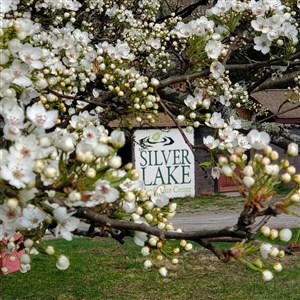 April 26, 1954 (67 years ago) Polio vaccine field trials begin at an elementary school in McLean, VA. Using a double-blind method for the first time, the study involved nearly 2 million children in the U.S., Canada, and Finland. A year later, the vaccine was announced safe and effective and became a standard in children immunizations. Polio had reached epidemic proportions in the first half of the 20th century. The vaccine, developed by Jonas Salk, effectively wiped out the paralyzing disease in a matter of decades in the western hemisphere.