The Rev. Susan Izard is Minister of Spiritual Life at First Congregational Church of West Hartford.


As they entered the tomb, they saw a young man, dressed in a white robe, sitting on the right side; and they were alarmed. But he said to them, ‘Do not be alarmed; you are looking for Jesus of Nazareth, who was crucified. He has been raised; he is not here. Look, there is the place they laid him. But go, tell his disciples and Peter that he is going ahead of you to Galilee; there you will see him, just as he told you.’ So they went out and fled from the tomb, for terror and amazement had seized them; and they said nothing to anyone, for they were afraid.


The Gospel of Mark ends with the word afraid. It’s Easter Sunday but the Gospel sounds more like Good Friday or Holy Saturday. Where’s the resurrection story?

Some years ago I went on a pilgrimage to Israel with a group of Spiritual Directors. We spent our last two nights in Nazareth at the Sisters of Nazareth Convent next to the Basilica of Annunciation. The convent sits on land containing the remains of a 4th century church. In the mid 20th century while restoring a building, extensive excavations took place and a Jewish burial site from the Second Temple times was discovered not far from the ancient church. While not open to the public without a reservation, those who stay at the Convent can take a tour of the ruins. 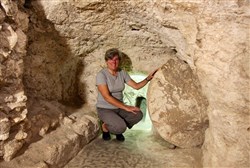 I joined other pilgrims on the long decent into the excavation site. The Convent buildings and courtyard were above us. Wooden walkways and bridges led us to viewing sites of an ancient town and tiny church. As we looked down at the ancient stone communion table that was found when the church was uncovered, our guide, a Sister of Nazareth, told us that when the roof was lifted off the church the air was filled with incense that had been locked in the room for centuries. Moving on, after some twists and turns, we came to the burial site, an empty tomb with the stone rolled back. A large hole led into the tomb and rock platforms lined the walls where bodies were laid. It was astonishing.  After spending over a week looking at archeological sites that seemed more like tourist traps, I unexpectedly found myself underground in a tiny ancient village silenced by the awe and wonder of looking into an empty tomb. For that moment I’d wandered into the living Word.

In Mark, the young man dressed in a white robe instructs the women not to be alarmed but to go and tell the disciples and Peter to head to Galilee where they will see him.  In this resurrection story, we are invited to stop looking in the tomb, the place of death, and turn toward Galilee and meet him among the living. We are invited to turn away from our fear and seek out the light and love of the living presence of God in our midst.


O Holy One, when our fears draw us to places of darkness and death, help us to remember to turn around and walk into life so we may be guided by the Risen One who shows us The Way of living. Amen.

This Week in History:
Mar. 28, 1979 (39 years ago): Three Mile Island nuclear reactor overheats near Harrisburg, PA. Several errors made to prevent a meltdown led to other problems. A meltdown was averted, but the plant leaked radioactive steam and water into the Susquehanna River, raising radiation levels in four counties around the plant.