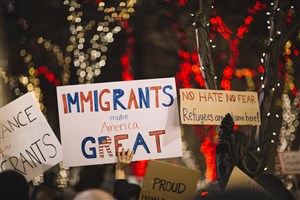 Our church members, Katie and Carlos, were in a bind. Katie’s family was in Massachusetts and living closer to them would be good for support and connection of their young family. Carlos, who was working with an immigration attorney to get status, had a driver’s license in California, but would lose that privilege if the family moved here. They chose to give up the license in order to be near family.

Knowing the challenges Katie and Carlos had faced made it an extra wonderful celebration when this June, after close to 10 years of advocacy and organizing, the Family Work and Mobility Act was passed by the Massachusetts legislature, and then upheld over Governor Baker’s veto. This allowed for our undocumented friends to get driver’s licenses. They would be able to take kids to school, go to doctor’s appointments and get to work. They would be able to insure their cars. This was exactly the kind of legislation that Katie and Carlos needed.

Opponents of this act are seeking to have it repealed; it appears as Question 4 on the November ballot. (On the back page, make sure to turn your ballot over to vote).  A 'Yes' vote preserves the act, allowing for driver’s licenses regardless of immigration status.

My support for Yes on 4 is grounded in the teachings and directives of our sacred story - welcoming the stranger in our midst, doing justice, loving kindness, being a blessing to all the world. Affording the most vulnerable in our midst, those who have had to leave their place of birth in order to support themselves or survive, the chance to legally drive to work, school, and get groceries is what I believe Jesus would have happen.

Added to the faith-based commitment to 'Yes on 4' is the public safety improvement that comes with this legislation. With this legislation we join 17 other states, including VT, NY and CT, which make driver’s licenses available to residents regardless of their immigration status. This has resulted in more tested, licensed and insured drivers on the road, a reduction in hit-and-run accidents, and more revenue to the states via the Registry of Motor Vehicles and insurance companies. This legislation has the support of Major Cities Chiefs of Police Association as well as sheriffs, districts attorneys and police chiefs across the Commonwealth.

'Yes' on Question 4 is a win/win vote. It is a vote for compassion, justice and public safety.

Massachusetts folks - would you consider talking to just five people about YesOn4 as soon as possible? Here’s a link to more info. And here is a flyer to share.

Photo by Nitish Meena on Unsplash