What on Earth is Happening?

What on Earth is Happening?

Hurricane Harvey produced a level of rainfall and flooding that "hasn’t been seen before in our country.”  It was a Category 5 hurricane.  We anticipate one of these to come our way in North America every few decades…though not with this much rain.  But then, before the flood waters had even receded and before folks could even get back into their homes, another Category 5 emerged in the Atlantic.  Never before, they tell us, has a Category 5 lasted this long in the Atlantic.  And never before has the entire state of Florida been in a hurricane warning.  And before it even makes landfall in Florida, along comes Jose on its heels, slamming into island regions that have been rendered 98% uninhabitable by Irma.  Never before, they said, have they seen or recorded an Atlantic map with named hurricanes of this intensity in such close proximity. Then, while we are still trying to get news from the devastated areas left in these hurricanes’ wake, Maria suddenly reaches Category 5 strength and strikes devastation to Caribbean islands still reeling from this unprecedented hurricane season.  Never before have we seen this.  And with all this water in the Gulf and Atlantic coasts it’s hard to believe the dry grass and brush being consumed by the largest wildfire in the Los Angeles region...

What on Earth is happening? 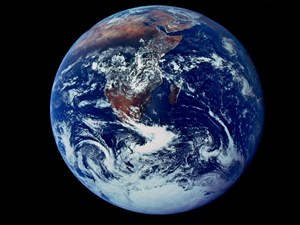 There are some who are not surprised by this. Ninety-nine percent of scientists around our globe who have looked at the data tell us this is absolutely consistent with what has been predicted.  And more and more people are coming to the same conclusion.  Storm-produced disasters will come with greater frequency and intensity.  The ‘never before’ has become the weekly news.  Get used to it.  Get ready for it.  The Earth has overdosed on gases.  It’s seeking a new balance.  Dry will be drier.  Wet will be wetter.  Winds will blow stronger.  Hot will be hotter and cold will be colder. Our planet is trying to adapt.  It is creating a new normal.  And it may not be hospitable or inhabitable for life as we know it.

As a people of faith we will be increasingly called on to respond. The pain we see in the images that flood the news is real.  Its trauma will last through and beyond the long road of physical recovery of property.  And disasters such as we have seen these last few weeks often hit the most vulnerable among neighbors.  They are the ones without a safety net or resources to help them recover.  It is people of faith who will be there, who have always been there, long after the news crews have moved on to the next story.

We also need to be there before the news crews.  We can’t treat the symptoms and ignore the cause.  The amount of rain that fell from Harvey was enough to cover all of Manhattan a mile deep.  It was enough weight to actually buckle the tectonic plates beneath it.  As a people of faith, we have also always been there to advocate for the change in our culture, world and lives that is needed.  We speak for the still speaking God who created the world and asked us to care for it.

When my first grandchild was born, one of my family members sent a congratulatory card that also encouraged me to remember that I had a responsibility to the world in which they would grow up.  We are responsible for the world we are making and handing off to our children and grandchildren.  And the ones not yet born, who have no voice in this current moment, will one day ask what their grandparents did at such a time as this.  That thought plagues me.  It also drives me.  I hope it drives you as well.