12/10/2019 - by: Gretchen Elmendorf - Environment
Share
Today stirred some theology in my mind and spirit. Here’s a spiritual essay. I write out of my faith tradition with full respect for those of different faiths or no particular faith. I wrote this the day of a demonstration when 4 of our 50 friends at the Fore River Basin site in Weymouth were arrested for preventing Enbridge from some construction that day. 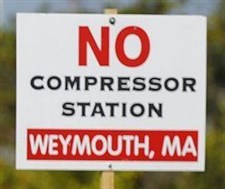 Advent is the word that describes for Christians the 4 weeks prior to Christmas. It begins liturgically with John the Baptist’s call in the wilderness for us to wake up, to repent and prepare for the coming of the Lord. In churches during Advent, we take John’s message to mean it’s time to prepare for the coming of the Christ child and of Christmas. When John says prepare by repenting, the meaning of this word repent is not what you might think it is. It’s not about regret or guilt or shame. It stems from the Greek word metanoia. It implies making a decision to turn around, to face a new direction, to go a better way.

Do you feel the call at Advent or simply during this time before Christmas and the New Year to Wake Up? So often as our spiritual lives grow, the same word can take on a different resonance year by year. This year, I hear WAKE UP, the Lord is near, as a clarion call to wake up and save our climate for humanity’s sake. For all creation’s sake. This is not hyperbole. Climate scientists say in unison we are veering off the climate cliff to climate catastrophe if we don’t severely reduce our carbon and methane emissions to almost nothing. Yet the unholy trinity of oil, gas and coal is pledging to rapidly escalate carbon emissions. 50 oil companies are bragging about it right now.

Enbridge is one such bragger. It’s planning to emit the heck out of us with its cancerous carbon and methane gasses in our own backyard in Weymouth and the South Shore, against our collective will. Enbridge plans to poison our children, residents, animals with benzene, neurotoxins, formaldehyde, carbon and other toxins, wrecking our climate, rapidly increasing gas pipelines and infrastructure. We all know this one compressor is just the start for Enbridge of rapid expansion. We’ve seen the blueprints. We feel the horror. Massachusetts is morphing into Gasachusetts and the “spirit of independence” that is the bedrock to our commonwealth and citizens' rights are being squashed by a gas dictator.

As Enbridge takes its money to the bank, the Enbridge private security guy is driving his big car and leading huge trucks and drilling equipment into our little plot of land surrounded by densely populated neighborhoods and 3,100 children. What does his license plate say? It says 'Bellum' —a Latin word for “war of all against all.” What? These words are words of terror. All against all? They remind me however of a holy phrase that is its counter opposite. Not all against all, but All IN All. I like the biblical passage so much better. Paul the Apostle writes that God is “all in all.” (1 Cor. 15:28) Wouldn't it be so much wiser if one’s claim to fame was proclaiming the God who is “all in all” instead of monographing your rich car driving on a stolen land with a hostile license plate 'Bellum' - “all against all —wage war?”

The Enbridge driver is right though. This IS a war between good and evil. This is a war between David v. Goliath, between creation and destruction, between cancer and health, between people’s rights and corporate profits, between a governor's fat and gassed up bank account and ordinary people’s accounts depleted by hospital bills and legal fees to fight them with.

This is a war between waking up and falling asleep. Wasn’t there a time when gas was used as an anasthetic to make you fall asleep? A sleeping gas? It still is. Except this time, the gas companies are hoping we’ll fall asleep through their mad drive of escalating toxic emissions and making money with gas no one in MA needs. They hope we’ll fall asleep and not notice they are giving us cancer, they are destroying creation, they are hurtling us into a climate catastrophe unto the point of no return.

This advent, let us Wake Up! Many in Weymouth are waking up every morning early to stand in the freezing cold at 6:30 at the Fore River site to put their bodies on the line. Will you join them if you are physically able? What about if we prepare for Christmas and the Christ child by saving the creation his Father, our God, created and declared, “and it was good.” If you take Genesis’ early creation account as a metaphor, God was describing the land as good, yes even that small parcel at the Fore River. How would God describe that land now, soil soaked with arsenic and asbestos, rotting with toxic coal clinkers. Land poisoned by too many dirty industries? Land being raped by a man driving a truck pompously in circles over it with the license plate Bellum as his exhaust spits out on the men and women shivering in the cold saying — “Stop Poisoning our Children!”

Let's wake up, people. I know it's scary. I know it’s time for 'Joy to the World' and fighting for justice is seriously inconvenient while there are so many holiday festivities and there’s snow and cold weather. These companies get away with murder by exhausting us and using holidays as cover for Herod-like deeds. But there’s a particle in the holiday greeting Peace ON Earth that needs to change this Christmas. We need to go beyond prayer and singing about Peace ON Earth. We need to get busy, all hands on deck, and make Peace WITH the Earth, before It’s too late. Put our bodies, our gifts and our spirits on the line for our environment.

Enbridge, Governor Baker, repent. Turn around. Face a new direction. Our planet is at stake and so are your souls.

Gretchen Elmendorf is the minister of East Weymouth Congregational Church, United Church of Christ in Massachusetts.