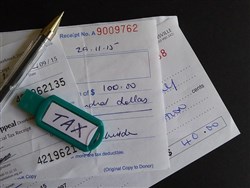 To qualify, charitable donations must be: 1) in cash, not property (a “cash” donation includes money contributed by cash, check, credit card, electronic funds transfer, or payroll deduction), and 2) given to a 501(c)(3) nonprofit, charitable organization, such as a religious organization like your local church, the SNEC, and/or the national setting of the UCC.

Importantly, this universal deduction is used to calculate one’s Adjusted Gross Income (AGI), so taxpayers don’t have to itemize their deduction on Schedule A to claim it. Instead, it is anticipated that taxpayers will simply list it as an adjustment to income on Schedule 1, then deduct it from their gross income (along with other adjustments to income) on page 1 of their Form 1040.

There is no requirement that taxpayers provide any documentation for their contributions with their tax returns. However, the IRS does require that taxpayers keep a written record of the cash contributions. For cash donations under $250, donors can use a bank record or other documentation that substantiates the payment. For cash donations above $250, the donor must have a document or timely receipt from the charity, for example, the church.

Because of the TCJA, it is estimated that 90% of Americans now choose to take the standard deduction instead of itemizing, and thereby are unable to deduct their charitable contributions. While tax deductibility is generally not the primary reason why people make charitable contributions and/or how much they give, it can be one consideration.

Since the passage of the TCJA charitable giving has declined. According to the annual Giving USA report, total charitable contributions for 2018 fell by 2.0% from the prior year and individual giving fell by 2.3%. Smaller donations took the biggest hit during 2018 with donations under $250 declining by 4.4%. Boosted by strong, positive economic indicators, 2019 saw a reversal, and giving increased in both the total and the individual giving categories. What will happen this year with COVID-19 is anyone’s guess.

Item #3 in the Taxpayer Bill of Rights states, “Taxpayers have the right to pay only the amount of tax legally due…” With the CARES Act, those filing a tax return for 2020 have a right to claim up to $300 in charitable contributions they make, including those made to the church, and thus reduce their taxable income.

I urge our churches to inform their members and friends of this tax change so that they can avail themselves of it when they file their 2020 tax return. Although there is legislation pending to both expand and extend this universal charitable deduction, its future is unclear. Hence, this may be the only year it is available.

*The TCJA approximately doubled the standard deduction, and for 2020 it is $12,400 for single taxpayers and those married filing separately, $18,650 for head of household, and $24,800 for those married filing jointly. In addition, the TCJA eliminated or restricted many itemized deductions, such as limiting the state and local deduction tax, and for most people, unreimbursed employee expenses.
These tax changes are important because they make it more attractive for far more people to choose to take the standard deduction instead of itemizing their deductions when given this choice. Estimates show that with the passage of the TCJA only about 10% of taxpayers now decide to itemize their deductions, down from 30% prior to the TCJA.

Reminder: In May, I wrote about a tax-wise way for people to financially support their local church, the Southern New England Conference, the national setting of the UCC, or any nonprofit organization for that matter, by making a Qualified Charitable Distribution (QCD) from their Individual Retirement Account (IRA): https://www.sneucc.org/newsdetail/13997021

Rev. Dr. David Cleaver-Bartholomew is the Director of Stewardship and Donor Relations for the SNEUCC.