A Vigil for Undocumented Neighbors

A Vigil for Undocumented Neighbors

Nestled into the crook of the Mass. Ave Connector there is a squat, unassuming, concrete structure that thousands of people drive past every day without realizing that it is in fact a prison. The Suffolk County House of Correction, to be precise.

On the top floors of this prison, the United States Immigration and Customs Enforcement (ICE) holds detainees who have not necessarily been convicted of any crime. Most have pending immigration hearings or are awaiting deportation. The federal government pays $90 per day to the state for each of the approximately 270 detainees held at Suffolk County House of Correction. In 2009, one man, Pedro Tavarez, died while detained in Boston. He is one of hundreds who have died in ICE custody since 2003.

Our faith teaches us that each human life is precious to God, each human being made in the divine image. Our faith also calls us to raise our voices against injustice and to speak out on behalf of the marginalized. 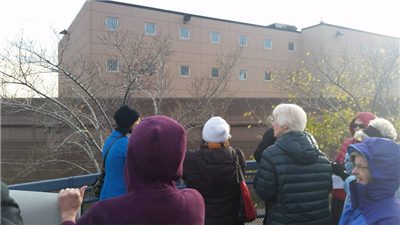 The State of Massachusetts is currently participating in, and profiting from, the federal government’s inhumane and unjust incarceration of our undocumented neighbors. The Boston New Sanctuary Movement, joined by the Immigration and Refugee Justice Task Team of the Massachusetts Conference of the United Church of Christ, and other local partners, will continue holding a quarterly vigil outside the Suffolk County House of Correction in order to bear witness to the presence of precious lives trapped behind bars, to offer our solidarity and witness to those who are detained, and to demand an end to the state’s cooperation with ICE.

At these vigils we walk out onto the Mass. Ave Connector, a road that lifts us nearly to eye level with detainees who wave from windows. We sing, we pray, and we struggle to keep them from being forgotten.

It is our call as people of faith to let the light of God’s truth shine in the shadows, to bring good news to the captive, and to seek justice for all.
If you feel called to join us, please contact Rev. John Allen of the Immigration and Refugee Task Team john@fccmilton.org.

Click here to read a reflection on this vigil from Denise A. Garcia, a Unitarian Universalist and a Steering Committee member of Boston New Sanctuary Movement
[1] Maria Sacchetti, “Detainee’s death is blamed on cardiac arrest Boston Globe,” December 1, 2009. http://www.boston.com/news/local/massachusetts/articles/2009/12/01/immigrant_detainee_died_of_cardiac_arrest_autopsy_finds/

The Rev. John Allen is the Pastor of the First Congregational Church, UCC in Milton.