Ten Years After Sandy Hook: God Forgive Me, Forgive Us

Ten Years After Sandy Hook: God Forgive Me, Forgive Us 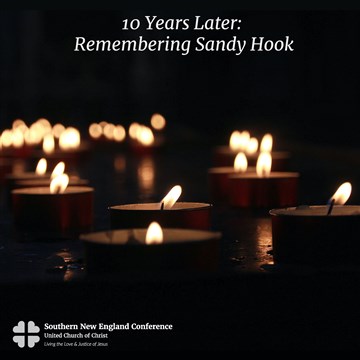 My son had just turned nine when the children were killed at Sandy Hook. He was only a little older than they were. I was waiting for him and a couple of his friends outside of their school, ready to take them out for pizza and a movie to celebrate his birthday. I saw news about what had happened on my phone, so I was careful to turn off the radio as the boys piled into my minivan.

Later that weekend, our family talked about the school shooting over dinner. We did not hide things from our son as he was growing up, because these days there is no way to shield your children from the news. We always tried to talk openly, separate facts from rumors, and answer questions as honestly as possible.

I expected the conversation to be hard. But I had no idea how emotionally unprepared I would be for one of his questions.

“Why didn’t the lockdown work?” he asked.

A little piece of my heart just broke. Shattered. This little third grader was already a seasoned veteran of lockdown drills. He knew to hide quietly in a corner of the classroom while the teacher locked the door and turned out the lights. He had been taught that this would protect him should a bad person get into the school.

As a mom, I desperately wanted to assure him: don’t worry, you’ll be safe, everything will be fine. But 20 first graders and 6 adults had been shot in a suburban elementary school – just like his – one state over in Connecticut. How could I look him in the eye and tell him honestly that this would never happen here?

“Why didn’t the lockdown work?”

“I guess it’s good that my room is so far away from the front door,” my son responded. His classroom was on the third floor, far from the entrance to the building.

Forgive me for reassuring my child that other kids were more likely to be in the line of fire than he was.

Forgive me for feeling relief at that.

Ten years have now gone by since that awful day. And there have been so many school shootings since then: 54, according to NBC news. Active shooters have entered schools 54 times, taking more than 100 lives, shattering countless others since Sandy Hook.

Shooting number 51, the killing of 19 students and 3 teachers in Uvalde, Texas, came just before my son graduated from high school this past spring. Seeing that on the news, I couldn't help but be comforted by the fact that he was finished with school. He was done, and he had survived. While there are plenty of other dangers lurking in this world, a school shooting is no longer a threat to him.

Forgive me for being relieved that while other children may still be in the line of fire, my son isn’t one of them.