11/8/2016 - Justice and Witness
Share
Samuel answered the Lord, saying, ‘Speak, for your servant is listening.’ Then the Lord said to Samuel, ‘See, I am about to do something in Israel that will make both ears of anyone who hears it tingle’. As Samuel grew up, the Lord was with him and let none of his words fall to the ground. ~1 Samuel 3 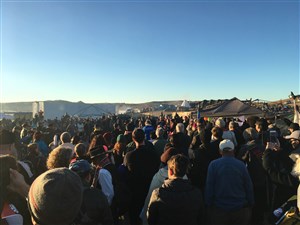 This week, you were in the community gym of Cannonball, North Dakota.

There were 500 people there, all supporting the Standing Rock Sioux Nation in their fight to protect their sacred lands and water. It was a training, so that faith leaders from across the country could join native peoples in resisting the Dakota Access Pipeline. It was a training on being peaceful, prayerful and respectful, but not passive.

In the middle of the training, the organizers asked. “Would everyone from a church that has repudiated the Doctrine of Discovery please stand up?” 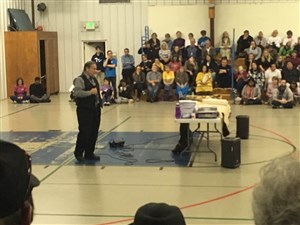 And in the Cannonball Community Gym everyone from the United Church of Christ, including you, stood up.  You stood up in Cannonball North Dakota because at General Synod 29, you stood up to say that the UCC did indeed repudiate the Doctrine of Discovery. (Read more here.)

What you say, United Church of Christ, matters. Because God will not allow one word to fall to the ground.

Story and photos by Rev. John Edgerton. Rev. Edgerton was one of eight Massachusetts Conference clergy to travel to Standing Rock on Nov. 3 in support of Sioux Nation in their fight to protect their sacred lands from damage by the Dakota Access Pipeline. He is associate minister at Old South Church in Boston.