1/16/2019 - by: Stephen Camp - Justice and Witness
Share
Editor's Note: The author took part in the Interfaith Freedom and Justice Ride 2019, a delegation of 37 Christians and Jews from Hartford who traveled together to Alabama. Other reflections and coverage can be found here.

Sometimes many of us don’t believe a thing, because we are not in proximity of that thing in every waking moment of our lives. We do all we can to avoid the reality of that thing and its implications for our personal lives. We can ignore that thing because we deny and believe it does not affect us.  But for many “seeing is believing.” We are affected. When we are confronted with anything that beforehand we did not have to wrestle with in our lives, we are often jolted into acting differently or at the least saying to ourselves that the thing exists and has existed and we have had a part in it and its thriving all along. 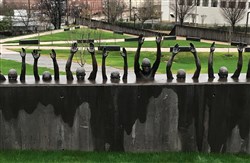 That thing, “racism” is real. It exists and in to many places and it still thrives. There is no ignoring it any longer, at least for those who visited Montgomery, Selma and Birmingham recently. It was a trip planned to help all who wanted to see and to believe for themselves, that nagging thing racism and how it efforts all of us in this nation. Some went to be reminded. Other found and expressed internal guilt that needed new channels of release and atonement.  The truth of those areas and the history that this particular southern area came clearer to the 35 of us who traveled there to see and believe for ourselves.  We were a diverse group, Christian and Jew, Black and White, younger and seasoned in age, gay and straight, but more than that, human beings wishing to open ourselves to a part of the history that has shaped us and the history of this nation.

I don’t think any of us who went on this freedom journey will be able to say that they can’t see in a heart, spirit and intellectual way, that racism is of no consequence or effect to themselves or the world they live in. No one left the area saying that racism is something that is beyond my reach to do something about while I have breath. There was hope as a result of this trip, as it reminded us that once more that we were blinded, but in seeing we can believe another world is possible.  And that’s a good thing.

The Rev. Stephen Camp is Pastor of Faith Congregational Church in Hartford, CT