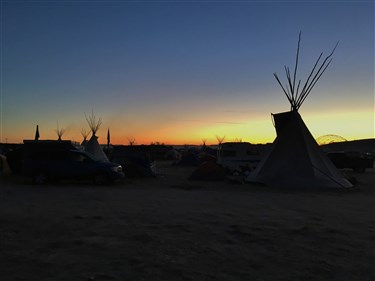 The Oceti Sakawin Camp at Standing Rock could, upon first sight, appear to be an ancient indigenous harvest gathering, with its smoke rising at dawn from the frosty teepees or, to another set of eyes, perhaps trigger memories of Japanese internments camps or, to another,  WW2 refugee camps in Palestine.    Upon coming closer it seems more like one of thousands of north american camping outposts with porta-potties and dumpsters, or then again, be a native Pow Wow with the sacred fire and various kitchens set up to serve whomever walked in or to welcome one more set of helping hands.  There was constant wood-stacking and water delivery, at the kitchen where I volunteered, a buffalo was wheeled in in a large plastic cooler alongside stacks of gluten free crackers, alongside the piles of squash. This is to say,  the encampment is extraordinary in its inherent hospitality and mixing of cultures, its organization and in its basic peacefulness, brought about in part by its no drugs, no alcohol, no swearing policies enforced by everyone and no one. But it all works.

Then there are the tragic underpinnings of grief and trauma, both fresh and ancient.   In the few days we were there were two young women injured by rubber bullets and 140 young people thrown in jail for "jay-walking" on the riverbed.  Native people are particularly at risk and women, children and elders are especially vulnerable when they join the protests.  The actual DAPL workers seem to be the most frustrated, violent and angry perhaps because they are now asked to work all night in the cold wet landscape.  While the police attempt to keep order they often give in to their own frustration for what has become daily  and now increasing tension as the digging comes closer and closer to the river, the days grow increasingly colder and anxiety increases.  This is all overlaid on what have been inter-tribal differences and the legacy of poverty along with the many many betrayals perpetrated by our ancestors on each other. 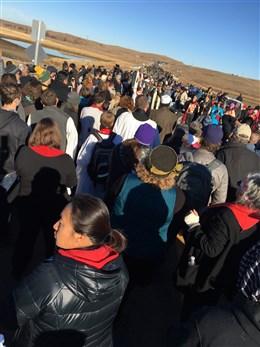 Then come the clergy. Initially it was to be 100 then 300 and at the actually event there were over 500 members of faith communities, most of whom were clergy but also including lay people who had felt called.   The Rev. John Floberg, rector of three local episcopal churches, put out the call and members and four Conference Ministers of the United Church of Christ were some of the first to respond.  On the day itself, rabbis joined Quakers joined Methodists and ELCA pastors.  The Unitarian Universalists were originally given credit for the call, perhaps because their golden stoles were most evident as was their STANDING ON THE SIDE OF LOVE banner.

But the moment most important came a bit after 9AM on November 3, when Christian clergy from seven denominations read aloud the repudiation of the Doctrine of Discovery, otherwise known as the Papal Bulls.  The Papal Bulls of the 15th century gave Christian explorers the right to claim lands they "discovered" and lay claim to those lands for their Christian Monarchs. Any land that was not inhabited by Christians was available to be "discovered", claimed, and exploited. If the "pagan" inhabitants could be converted, they might be spared. If not, they could be enslaved or killed.  Many indigenous people still claim these bulls are being used by countries throughout the Americas to deny the rights of indigenous peoples, and to perpetuate colonization throughout the Western Hemisphere. To begin to bring that system of colonization to an end, and to move away from a cultural and spiritual tradition of subjugation, the World Council of Churches repudiated the doctrine and encouraged churches to begin educating themselves to do the same.

Since then the United Church of Christ, Episcopal Churches, ELCA, Methodist, Baptist, Presbyterian and Unitarian Universalist churches have issued their own statements and members of those denominations symbolically read and burned the doctrines in front of native elders.  This was the focal point of the morning and from there those gathered were offered a smudging and sent on to the bridge which crosses the Missouri River.   There was some tension when some clergy, against the protocol established,  went forward to confront police and were called back. Simultaneously large circle was formed and then called closer to hear words of inspiration and greeting from many of the congregations and to sing together in various languages.  By noon those speeches had finished and the entire gathering was asked to form a circle and to begin the elaborate passing of the peace typical of native american gatherings.  Simple bag lunches were supplied as was water and the event ended by 1pm.  A small activist group, having planned a separate act of civil disobedience,  continued on to the state capital for a formal protest where 14 were arrested for trespassing inside the state capitol building. 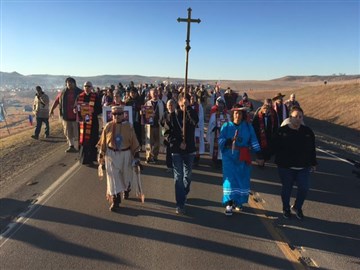 When asked, native elders and participants alike said this meant both nothing and everything.  Some native elders said our coming was prophesied, that all seven nations would join with leaders of all traditions at a sacred river.  Many fear that no effort is enough to stop this or any other pipeline; treaties are disrespected, sacred sites and disrupted.  Rev. Floberg asked us the rhetorical question of whether we colonizers would allow a pipeline to extent through our National Cemetery or the one at Gettysburg?   We learned about the gravesites along the river and about cities populated by millions who would be affected were the pipeline to leak.   We heard the names of countless places where pipelines and dams have disrupted sources of food  and water. We remarked that while we were blessed by extraordinary warm weather this also highlighted the global changes already happening, and, yes, we all bemoaned the fact that we had all used fossil fuels to arrive at Standing Rock. And we recognized that one of the best gifts we could give longtime protesters was a nice long shower at the hotel. We all congregated where we could find internet service. This was partially because service is being regularly disrupted, even at the Casino where many stayed.

The night after the protest I found myself at a table eating with clergy from Washington and Minnesota, Maryland and Iowa. Each of us had come for our own reasons but all of us because someone or something we loved was being threatened and we wanted to be part of action for change. We liked to think that next week, after the election, President Obama will issue an executive order because that is what it would take and time is short.  If not, I fully expect this to be another of the many actions we clergy will need to make, for the good of our own hearts and for the morality we strive to foster.  That we were diverse in age, race and religion was a good if complicated reality, perhaps just a drop in the river or a turn of the butterfly wing that will affect the currents of change we all aspire to lead.

Story and photos by Lise Sparrow, pastor of Guilford Community Church, United Church of Christ, Guilford, VT. Rev. Sparrow was one of a group of UCC pastors from New England to travel to Standing Rock on Nov. 3 in support of the water protectors, joining over 500 clergy from 22 faiths. Eight Massachusetts Conference pastors were among those who participated.