3/21/2018 - by: Joanne Dickey Judith Raymond - Justice and Witness
Share
Recently we had an opportunity to visit with the Rev. Cheryl Kerr, pastor of the Allin Congregational Church in Dedham, MA, to discuss the plight of Puerto Rican evacuees currently residing at the Marriott Residence Inn and the Fairmont Hotel in Dedham.

Here is what we learned. 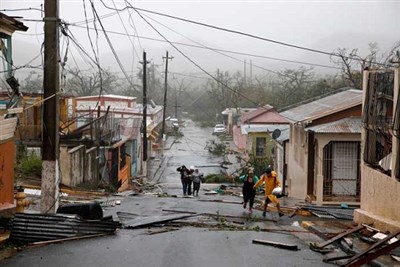 After hurricanes Irma and Maria wiped out the infrastructure, homes and schools of a huge population in Puerto Rico, Governor Baker stood with other governors throughout the country and invited evacuees to come to Massachusetts.  The evacuees were invited to come on a temporary basis, or could plan on staying for a longer period of time, and Massachusetts committed to helping these families resettle.

FEMA placed the evacuees in hotels that had kitchenettes so that the families could prepare their own meals.  Governor Rosselló of Puerto Rico distributes the FEMA funds and determines who gets more funding with extensions after the original funds run out.  The first FEMA funding deadline was January 13.  The thought was that the distributed funds would be small and temporary, so that the evacuees would eventually return to Puerto Rico.  After the January 13 deadline, some of the evacuees lost funding and did not get extensions.  They are currently receiving support from the Red Cross Fund.

The second allotment of FEMA funding was due to run out on February 14, but our state legislators managed to get an extension to March 20.

Evacuees just received calls that their TSA funding (this is the FEMA funding) will be extended into April.  We are now focused on transferring dependency from TSA funding to DHA (Disaster Housing Assistance) which funds up to 18 months and focuses on more long-term housing.

While all families/units have applied for housing assistance from the state (section 8 vouchers) only one has actually been approved.  There’s a two-year wait for these vouchers, leaving our families with no choice but to ride out TSA funding.

A few families have secured housing but evacuees are still occupying 39 or 40 hotel rooms.  The first wave of evacuees sent their kids to the Dedham schools; on one day 33 non-English speaking children showed up at the schools.  The Dedham school system immediately organized their Spanish speaking staff to go to the hotels and register these children – 11 of these kids are high school students.  Also, Dedham has created an Equity and Inclusion Task Force to handle diversity issues in the town of Dedham.  This task force includes teachers, parents and guidance counselors who will counsel on diversity issues in the Dedham school system. 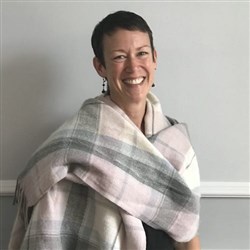 Two big issues facing the evacuees are finding jobs and finding housing.  Many licenses and degrees don’t transfer easily from Puerto Rico to the U.S., so that many of the evacuees will probably end up under-employed.  They will have to find jobs that will enable them to support themselves and pay for housing.

Rev. Kerr (shown at left) has been collecting gift cards (Uber cards, CVS cards, grocery cards, Charlie cards) from the very, very generous residents of Dedham and neighboring towns and organizations.  Since the last tallies they’ve collected another nearly $2,000 combined from churches and nonprofits from as far away as Burlington, MA!  The outpouring of support has been humbling, even as the need continues to be so great.

Judy Raymond is co-chair of the Immigration and Refugee Task Team.