People vs. Fossil Fuels: A Reflection

People vs. Fossil Fuels: A Reflection

10/20/2021 - by: Emma Brewer-Wallin - Conference staff Environment
Share
During the week of Indigenous Peoples’ Day, I joined with hundreds of others in Washington, D.C. as part of the People vs. Fossil Fuels week of action. Throughout the week, we followed the lead of indigenous people and others engaged in frontline fossil fuel fights in their local communities. Many of us were grounded in religious and spiritual traditions, and we exchanged the teachings and prayers that sustain our action.

As a community of young people and elders alike, we came to DC to bring the fight for climate justice to President Biden’s backyard.  Each morning, we began our day in song: I have not come here alone, I carry my people in my bones. I have not come here alone. If you listen, you can hear them in my soul. Then we marched to the White House, where we split into two groups: those risking arrest and those supporting them through presence and witness. 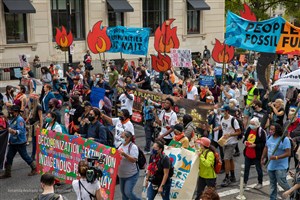 As those risking arrest stood or sat along the White House fence, speakers on the other side of the police line told stories from communities in the throes of environmental injustice. We heard testimony from Water Protectors seeking to stop Line 3, which violates the treaty rights of the Anishinaabeg  and threatens the survival of the Ojibwe people. We heard from leaders with RISE St. James, organizing to defeat the petrochemical industry in “Cancer [Death] Alley.” Each day, powerful leaders from around what is known as the United States uplifted the importance of treaty rights and indigenous sovereignty, and proclaimed our collective rights to climate justice and a livable future.
Even now that we have returned to the many places we call home, we are still waiting for President Biden to take the necessary action that is within his power. Contact the White House to echo these demands.  Between speakers, and each time people were arrested, we sang: Can you hear the warriors on the frontlines? We’re hurting. We’re working. Cause life is on the line.
To learn more about the People vs. Fossil Fuels week of action, watch this recap video. To hear interviews with faith leaders participating in the action, watch here.