7/20/2021 - by: Kathie Carpenter
Share
Boston Pride didn’t happen this year, or last year for that matter, and we need to tell you what’s going on. The Southern New England Conference ONA Ministry Team was faced with the decision whether to recommend the very popular Boston Pride parade (the largest and safest parade in all of New England) this year. We typically have a marching group of 100 people and it’s always a wonderful time. 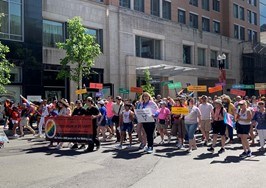 We were torn because of years of complaints that finally bubbled up, laying bare how the Board of Boston Pride had not represented the full queer community. For years, there had been quiet, now loud, complaints about how the parade had become vanilla and unresponsive to the stories and needs of QTBIPOC+ (Queer & Trans Black, Indigenous, People of Color).  We decided that we could not stand with an organization that would ignore Black lives and that didn’t put power and decision-making in the hands of the most appropriate people.

Except for the pandemic, the 50th anniversary of Boston Pride would have happened in June of 2020.  The annual festivities began in Boston in 1970, the year after the riots at the Stonewall Inn in Greenwich Village, New York City.  In 1969, it was serious, scary and historic stuff: gays, trans folks, drag queens and police.

Over the years, the tone of the parade changed, with more people celebrating their identity than remembering the pain of Stonewall. There’s nothing wrong with a good time - it shows what freedom and relief can mean. Those two goals should surely coexist. Later, family friendly parts of the parade began to emerge, perhaps as some LGBTQI+ people were raising families. Many families realized that children knowing about LGBTQI+ people is a good thing. Then community organizations, big corporations and churches populated the Pride parade.  With the increasing support in society, many queer people felt the parade had changed and lost its purpose. Whose parade is it now? For some, it was as if someone had stolen an important piece of the community and history.

But I digress. So the 50th was moved forward one year to June 12, 2021, in hopes of realizing the elusive anniversary.  Meanwhile, for years there had been rumblings about the structure and vision of the Boston Pride Board of Directors. The criticisms were that they were a non-diverse board (which was true) who had become comfortable with their role and attendant power as keepers of the Boston Pride legacy, and who didn’t listen to new ideas or register with changing times. Many of the rumblings came from the hurt and disregard felt by many Black, Trans, indigenous and people of color, who longed for visibility, inclusion, affirmation and ownership.  Eyes were finally opened wide in June 2020 when the Boston Pride Board presented a poorly worded, uninformed statement regarding Black Lives Matter and did not include Black Lives Matter concerns in their statements.

The Board promised, “We are providing multiple opportunities for people to become involved in Boston Pride to help transform our organization including positions on the Transformation Advisory Committee, Board positions, and Community Advisory Council positions.” The long-time president of Boston Pride offered to resign, but that was not enough.

“It is clear to us that our community needs and wants change without the involvement of Boston Pride. We care too much to stand in the way,” the Board said in a statement. “Therefore, Boston Pride is dissolving. There will be no further events or programming planned, and the board is taking steps to close down the organization. By making the decision to close down, we hope new leaders will emerge from the community to lead the Pride movement in Boston.”

We can’t know the details of what went on behind the scenes in these opposing groups on the way to “Pride 2021.”  But we do know that the criticisms and complaints had enough energy and validity to cause several results.

A group called Pride4thePeople was formed by some complainants.  Pride4thePeople did not believe the Boston Pride Board was up to the task.  They described Boston Pride’s “Faux Transformation Plan” as “business as usual.”  They called out Boston Pride for failure to address structural racism and their unbelievably ill-advised vote NOT to support Black Lives Matter in May 2020.

So we are at this place now where everything is uncertain.  What we know is that Pride in Boston has not happened yet and will likely not happen in 2021. But we feel hopeful.

Pride4thePeople seems determined to start anew with a new, more honest and inclusive vision. They might be able to rally support, given that numerous organizations representing the diversity of the LGBTQIA+ community are behind the push to fix Pride. Since the death of George Floyd in May 2020, there have been regular protests for justice.  You can see in every protest the beautifully expansive Queer & Trans Black, Indigenous, People of Color community in its finest righteous passion. They are strong and they are not going away.

Oh, the irony.  This year’s Boston Pride theme was “the Rainbow after the Storm.”  Let it be so.

Keep up with developments on Boston Pride through trusted news sources and the websites for each organization: bostonpride.org and pride4thepeople.org