12/22/2015 - by: Polly Hamlen
Share
Today, we stand at a critical juncture for our nation, as debates rages across the country about security and the plight of Syrian refugees.  Will we, as Americans, continue to welcome Syrian and Iraqi refugees into our country? Will we assist those suffering from torture and persecution, regardless of their religion, or country of origin? Or will we close our borders, and isolate ourselves in fear?

The ancient Christian feast day of the Holy Innocents, or Childermas, celebrated this year on December 28th, reminds us that our own story as a church is itself the story of refugees who found hope and survival thanks to succor from others.  Joseph and Mary carried their infant with them as they fled to Egypt, seeking protection from a ruthless ruler who slaughtered thousands of children to retain his power. We see the image of Jesus today in the face of Syrian children carried by parents across fences and barriers, and the Aegean Sea, trying to find shelter and safety.

At our best moments throughout our history, our churches and our communities have offered a refuge for others who were suffering in tragic situations around the world. During the time of slavery, Massachusetts played an important role in the Underground Railroad, and in opposing the Fugitive Slave Act. When potato famine decimated farms and communities in Ireland in the 1840s, and one and a half million Irish came to the States, Boston became a home for tens of thousands of Irish refugees.  In 1915, one hundred years ago, Congregationalists rallied to help Armenians fleeing genocide in Turkey. In more recent years, our communities have opened their doors to Vietnamese, El Salvadorians, Bosnians, Somalis, Rwandans, Congolese, Iraqis and so many others fleeing the ravages of war.

Yet, we know also that the full story of these transitions, when poor and struggling strangers arrived on these shores, are not always the picture book versions. There has often been an opposing current of prejudice and fear, and in some cases outright oppression and violence. The decimation of Native American communities after the arrival of Europeans remains a terrible tragedy that should never be forgotten. The burning of the Ursuline Convent in Charlestown in 1862 was part of a backlash against Irish immigration led in part by prominent Congregationalist clergy. Japanese and German citizens faced persecution and internment during WWII, and Jewish refugees were turned away, and forced to return to Europe where they were victims of the Holocaust. 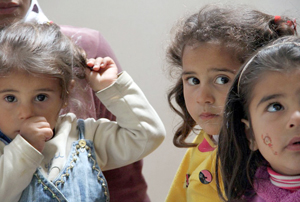 If we are willing to learn from the past, as a society, we can do better today.  Our communities are stronger for the diversity that immigration brings. Yet, fear and anger continue to be effective tools for politicians, and some religious leaders, to mobilize their supporters.  It is sobering to see the increase in hostility and angry rhetoric targeting Syrian refugees, who are themselves fleeing terror and violence, and who seek only a better life for their families.  I believe that our Christian faith calls us to reject this kind of inflammatory fear, and to emulate Jesus’s willingness to offer hospitality to all.  In this difficult time, we must speak out against the voices that encourage us to scapegoat the vulnerable, and counter the rising hatred and prejudice against Syrians, and Muslims in general.

At Christmas time especially, we are reminded that ours is a faith that celebrates generosity, love of neighbor, and the hope of peace for all.

The situation of the Syrian people is heartbreaking.  As winter approaches, there are over 4 million Syrian refugees in camps throughout the Middle East, and half of these are children.  After five years of war, people are desperate for help. Caught between the brutality of the Asaad regime and that of the Islamic State, regular everyday people have taken extraordinary measures to escape the destruction of their homes and country, leaving everything they have behind and risking their lives in long, arduous journeys. For so many of us, the profound tragedy of this refugee crisis was driven home by the image of three-year-old Aylan Kurdi, lying face down on a beach, drowned with his mother and baby brother in the attempt to cross from Turkey to Greece.

As a nation, we have the ability to help, while also being careful to protect our security. We already have a rigorous refugee resettlement process, one that takes 18-24 months to complete, and includes extensive security checks by multiple governmental agencies.  The UN refers cases to us that are carefully selected, with a focus on assisting women and children, people at risk of persecution or torture, including LGBT asylum seekers, or those who need special medical help.  No one is settled here if there are any concerns at any point in this process. Refusing to allow resettlement to all Syrian or Iraqi refugees, as recommended by some politicians in Washington, would do little to increase our security and would condemn thousands of people to continued suffering and even death.

Our faith and humanity calls us to help Syrian and Iraqi refugees, because we are all children of God and we are one human family. As we approach the Feast of the Holy Innocents, may we remember with gratitude the safety that Joseph, Mary and Jesus found in Egypt. And let us recommit ourselves for the new year to making sure that our Commonwealth and our country continues to be a refuge and a welcoming home for those in need.

Photo of Syrian children in a refugee camp from UCC.org

Polly Hamlen is a member of the Interfaith Action and Ecumenism Task Team of the MACUCC.