7/2/2018 - by: Margaret Bendroth - Church History and Identity
Share
Your congregation’s history matters—and not just to the people in the pews.

This past March, the National Endowment for the Humanities awarded the Congregational Library & Archives a $308,000 grant to gather and digitize 18,000 pages of colonial-era church records. This is a renewal of a previous $300,000 grant we received in 2015. To make the award extra special, the NEH chose to highlight New England’s Hidden Histories (NEHH), as we call our program, in its press coverage. You can read the coverage here.

Since we began work in 2005, we’ve amassed a digital collection of over 40 different congregations. All are available on our website and many include transcriptions, for those of us who find tiny seventeenth and eighteenth-century script a challenge. View the collection here.

Receiving this grant is a huge accomplishment, both for the Congregational Library and for the spiritual descendants of those original churches. So many people still labor under the old stereotype of the Puritans as authoritarian kill-joys, always worried that someone somewhere was having fun. But their church records show that they were people much like us, fallible and forgiving. Even more important, the records show them learning to govern themselves, to make decisions by consensus, and to hold their ministers accountable. All of that we take for granted today (who gets excited over another church meeting?), but in the bygone colonial world, the “Congregational Way” was risky and unprecedented—and historically significant, as historians now agree, a step toward democracy.

More and more researchers are discovering the value 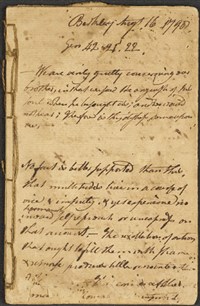 of these records. Beyond genealogical data and the obvious “churchy stuff” there is a wealth of information about life in colonial New England: attitudes about race and gender, mortality rates and the paths of epidemics, even orthography and weather patterns. We are especially delighted that our longtime NEHH board member Douglas Winiarski has won the prestigious Bancroft Prize, one of highest honors for scholars of American history, for his new book, Darkness Falls on the Land of Light: Experiencing Religious Awakenings in Eighteenth-Century New England (University of North Carolina Press, 2017). Doug drew heavily upon documents made available through New England’s Hidden Histories, and writes in his opening acknowledgments that NEHH “will revolutionize public access to many of the relations and church records employed in this study.”

The NEH award is particularly sweet to those of us at the Congregational Library who remember its long-time director and my predecessor, Harold (Hal) Worthley. Back in the 1970s, for his dissertation project, Hal traveled to every Massachusetts Congregational church gathered before 1805 and found their records—a mind-boggling achievement in itself—and created a full inventory. We’ve discovered that, even decades later, that wonderful inventory is still accurate. Before he passed away last year, Hal not only got to see others taking up his life-work and continuing it on, but, with his wife Barbara, took a leading role on our team of volunteer transcribers.

We invite all churches, not just those with colonial roots, to become part of New England’s Hidden Histories. You can support us financially—significantly, our NEH grant does not cover staff salaries and the high-level tech support required for a digital project—become a volunteer transcriber, or just sign up to learn more. Like Hal Worthley, our project director, Jeff Cooper is a true road warrior. He’s available for talks and presentations, for any congregation wanting to learn more about their roots.

Local churches should know that the Congregational Library also provides practical help in dealing with more modern stuff, all the paper piling up in the administrator’s office and the pastor’s file cabinets. The information is available on our website or by direct consult with our archivist Jessica Steytler.

Margaret Bendroth is Executive Director of the Congregational Library and Archives, as well as an author and editor of several books.