At the grocery store yesterday, the smells from a newly arranged corner of the fruit and vegetable area transported  me back to my early childhood at the Theological Community in Mexico City. There were "tejocotes" (the internet translates this fruit as the Mexican hawthorne), cinnamon sticks, "piloncillo" (blocks of distilled and hardened sugar cane), tangerines, raw sugar cane, raisins and tamarind fruit, the ingredients for the Mexican Christmas hot punch, neatly arranged in preparation for the coming of advent. I just stood there a minute breathing in the memories.

"La Posada," the Mexican Christmas party, is a special time to remember how Mary and Joseph could not find a place in a Bethlehem inn. I remember the delicious spicy smell of the hot punch lacing the cold winter night as we decorated with paper flags and a crèche (in our family, complete with the kings traveling to the manger on the flat cars of a Lionel train!)  The piñatas back then were stars made of paper maché with a clay pot core, not filled so much with candy as they are nowadays, but with raw sugar cane (we would rip the peel off with our teeth, suck on the sweet fibers, and then spit these out into the yard when we were finished) and tangerines. I still love tangerines while I am forever leery of piñatas!  I haven´t forgotten how as children we had to dodge the flying shards of the clay pot breaking at the wild swings of  a blindfolded child armed with a wooden broomstick. In Spanish, we would question, "¿a quién se le ocurre?", or "who came up with that bright idea?"!

One of the Christmas carols sung especially during "La Posada" has been running through my mind all month. This traditional song involves reenacting part of the Christmas story. Most of the  party goers stand outside the home or place where the party has been prepared. They are dressed in costumes and two people are chosen to represent Mary and Joseph. Those inside the house represent all who filled the inn, and someone is selected to be the keeper. Then those outside and inside each sing a verse of the following carol.

Joseph, Mary and those outside sing:
En el nombre del cielo os pido posada, pues no puede andar mi esposa amada.
In the name of heaven, I ask you for shelter for my beloved wife can go no farther.

The innkeeper and those inside respond:
Aquí no es mesón, sigan adelante. Yo no puedo abrir, no sea algún tunante.
This is not an inn, get on with you. I cannot open the door, you might be a rogue.

Joseph, Mary and those outside sing:
No seas inhumano, tennos caridad, que el Dios de los cielos te lo premiará.
Do not be inhuman, show some charity and God in heaven will reward you.

The innkeeper and those inside respond:
Ya se pueden ir y no molestar, porque si me enfado, los voy a apalear.
You may go now and don´t bother us anymore, because if I get angry, I will beat you.

Joseph, Mary and those outside sing:
Venimos rendidos desde Nazaret. Yo soy carpintero, de nombre José.
We are worn out, all the way from Nazareth. I am a carpenter named Joseph.

The innkeeper and those inside respond:
No me importa el nombre, déjenme dormir, pues ya les digo que no hemos de abrir.
Never mind your name, let me sleep. I´ve already told you, we won´t open the door.

The innkeeper and those inside respond:
Pues si es una Reina quien lo solicita, ¿cómo es que de noche anda tan solita?
If she is a queen who is asking, why is it that she´s out at night, wandering so alone?

Joseph, Mary and those outside sing:
Mi esposa es María, es Reina del Cielo, y madre va a ser del Divino Verbo.
My wife is Mary, she is the Queen of Heaven, she will be the mother to the Divine Word.

The innkeeper and those inside respond:
¿Eres tu José? ¿Tu esposa es María?  Entren, peregrinos, no los conocía.
Is that you Joseph? Your wife is Mary? Enter pilgrims, I didn´t recognize you.

Joseph, Mary and those outside sing:
Dios pague señores, vuestra caridad, y que os colme el cielo de felicidad.
May the Lord reward you for your charity, and may heaven fill you with happiness.

The innkeeper and those inside respond:
Dichosa la casa que abriga este día a la Virgen Pura, la hermosa María.
Blessed is the home harboring on this day, the pure virgin, the beautiful Mary.

At this point, the door is opened and those outside enter as all sing:
Entren santos peregrinos, peregrinos, reciban este rincón, no de esta pobre morada sino de mi corazón. Esta noche es de alegría, de gusto y de regocijo, porque hospedaremos aquí a la Madre de Dios Hijo.
Enter holy pilgrims, pilgrims, receive this corner, not of this poor dwelling, but of my heart.
Tonight is for happiness, for pleasure and rejoicing, for tonight we will give lodging to the Mother of God the Son.

I have been thinking about these words and whether Mary, Joseph, and their unborn child would called by a different name today. Could they be tourists, migrants, refugees, sojourners, or internally displaced persons instead of pilgrims? 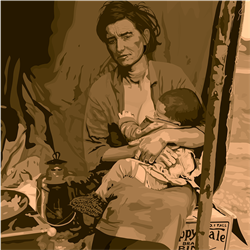 We have all of these here in Chiapas as we prepare to celebrate advent, "La Posada" and Christmas. While the world news focuses on one migrant caravan, and the Mexican government attempts to respond to internal and international pressure, the news and the government are silent with regards to the over 1,000 children, women, men, and elderly illegally evicted from their lands last week here in the Chiapan highlands. This is another of several communities to be forcibly removed from their lands in the last year. Political parties, international mining, energy and forestry companies, as well as the cartels, are vying for the valuable land where the native Mayan people have lived.  One strategy for "emptying" areas of their populations in order to free territory for business is to pit one community against another, stirring the embers of unresolved land titles. It is nearly impossible to unravel the tangled web of the interests and secret alliances of the big three power brokers: the Mexican government with its political parties, the multinational companies, and the mafia (who traffic weapons, drugs and people.) In southern Mexico, people are constantly on the move. Hence, it is wonderful place to practice the gifts and challenges of hospitality.  The people of the Roots in the Ruins: Hope in Trauma program in Juchitán, Oaxaca, whom I have been visiting for over a year, ever since the September 2017 earthquakes, are an example of how the hospitality of  "La Posada" expresses itself in the Mexican day to day.  Some are not yet living in their own homes after the earthquakes because they can´t afford the rising costs of construction. Others do not yet have jobs because local businesses have not recovered from the disaster.  And yet, as the most recent migrant caravan from Central America passed about 25 miles from their town, they spent several weeks preparing hot meals, driving out to the highway where the migrants passed, and serving those in need in any way they could.

We know what it is like to be without a home, to want something better for your family,  but to feel powerless.  We also know how it feels to receive the love, care and accompaniment of the people of God who came to us in the hour of our greatest need.  We had to share what little we have with those who have nothing, not even a safe place to sleep.

The people of Juchitán have inspired me to find new ways to celebrate "La Posada," the Mexican hospitality party this Christmas.  I invite you, too, to open a corner of  your hearts to pilgrims, tourists,  migrants, refugees, sojourners, and internally displaced persons and to remember Hebrews 13:2 (CEV), "Be sure to welcome strangers into your home.  By doing this, some people have welcomed angels as guests, without even knowing it."

As a Global Ministries missionary, Elena Huegel serves with the Intercultural Research and Studies Institute (INESIN) in Mexico.