1/18/2017 - by: Lindsay Popper - Justice and Witness
Share
One day this winter, I got a message from an old friend. Can we stay with you tonight? She’s a community organizer working with the Alliance for Fair Food and the Coalition of Immokalee Workers. She was in town with three other people from the CIW, and their original housing plan had fallen through. I said, of course, and so it was that a few hours later I was leading four women up the stairs to my third-floor apartment.

Two of the women were farm workers themselves, and know first-hand the horrible conditions that many migrant workers face while they pick our vegetables and provide the food that ends up on our tables. They know the slavery, the unfairly low wages, the consistent exploitation. The Coalition of Immokalee Workers, from its very beginning, has been about farm workers organizing themselves to improve conditions for themselves and their neighbors.

Since the late 1990s, the CIW has successfully secured wage increases for workers; held large corporations like Taco Bell, McDonald’s, and Burger King (among others) accountable for paying a fair price for produce; and fought against modern-day slavery, helping prosecute farm owners who beat, threaten, restrain, and lock workers in trucks to force them to work as agricultural laborers. 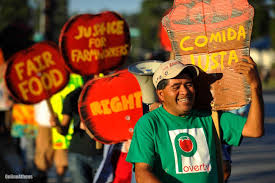 As I listened to these women’s stories, and as I read more about their struggles and successes online, I was humbled by how much they have accomplished. So much of what works right now in our food system we owe to organizers like the CIW.

The people of the Coalition of Immokalee Workers have insisted that they be treated fairly, and they have dared to believe that, working together, they can secure fair and adequate pay, protection from exploitation and violence, and a food system that is more just for all.

As we face the uncertain days ahead, many of us are asking questions about what to do to best support immigrants and other vulnerable groups in our society. Some of us are immobilized by the task at hand, some of us are baffled by what might happen, and some of us are anxiously trying to reinvent the wheel as we form new committees and start new programs aimed at helping.

While many different strategies will be required to protect vulnerable populations during the next four years, this much is sure: we can look to and follow the lead of successful immigrant-led community organizing groups. They have wisdom, experience, strategies, and powerful networks; importantly, they are already doing the work (and many have been doing it for decades). Many are very clear on how allies can support what they are doing: by boycotting
certain businesses (CIW is currently calling for a boycott on Wendy’s), showing up to protests and rallies, donating money, and many other things.

As we seek to usher in God’s kingdom here on earth—even in the midst of the Trump presidency—I pray that we would have the wisdom to follow the lead of those most affected.

Lindsay is a member of the Immigration and Refugee Concerns Task Team, and is the Christian Education Director at Allin Congregational Church in Dedham.