1/16/2019 - by: Isaac Lawson - Justice and Witness
Share
Editor's Note: The author took part in the Interfaith Freedom and Justice Ride 2019, a delegation of 37 Christians and Jews from Hartford who traveled together to Alabama. Other reflections and coverage can be found here.

All 35 of us boarded the coach bus as the sun was setting over Birmingham. Our destination was Montgomery, Alabama, with a stop for dinner first.  Upon arrival at the restaurant, I realized that I had left my bag with my laptop in the hotel’s conference room.  Since the restaurant was less than a mile away, I decided to walk back to the hotel by myself instead of asking the bus driver to make the extra trip. As a large man with male privilege, I usually don’t think twice about walking alone in the evening.  However, as I began walking, fear washed over me like an autumn downpour. 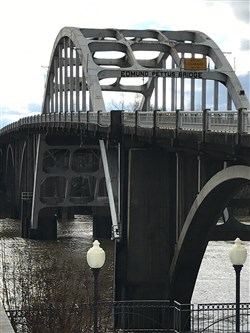 This walk was the first time that I was alone on this trip outside of my hotel room.  Although the gravity and pain of domestic white terrorism against black bodies was intensely palpable as we toured the National Memorial for Peace and Justice commemorating the more than 5000 black people lynched between 1877 and 1950 in the United States, I did not feel fear.  I felt anger, pain, and honestly sick to my stomach.  I literally shed tears at the Legacy Museum: From Enslavement to Mass Incarceration while reading an inmate’s letter to lawyer Bryan Stevenson declaring his intent to just give up on life.  The walk across the Edmund Pettus Bridge in Selma – site of 1965’s Bloody Sunday – left an eerie feeling in my spirit. And I was mad as hell at the visit to the 16th Street Baptist Church where four girls attending Sunday School were killed by white men who bombed the church.  Steps across the street was Kelly Ingram Park, the site where white police unleashed vicious dogs and full-blast water hoses on black children protesting.

This was a Freedom and Justice Ride in 2019 with an interfaith, multiracial group.  Unlike the Freedom Riders of the 1960s, police were not waiting to arrest us and violent white mobs were not threatening to lynch and beat us.  In fact, our freedom ride was pretty much devoid of any known opposition or serious risk.  So why did I feel afraid walking the 20 minute round trip by myself? I felt the fear of being a black man in a society where racism is very much still alive.  A black body in Alabama lacked rights any white person had to respect, a black body in Alabama was always guilty, and a black body at any moment could be harassed, beat, or killed with impunity. In fact, only 1% of lynching done after 1900 resulted in criminal conviction.

Being UCC ordained and ivy-league educated didn’t matter, at that moment I was hyper aware that I was a black man with all the sexualized hate, fear, and criminalization that the white supremacist imagination projects upon it.  What frightened me the most walking down that street was the inability to distinguish the “good white people” from the ones still alive today who ate snacks and smiled for the camera with “black bodies swinging in the southern breeze, strange fruit hanging from the poplar trees.”[1]

I tried to tell myself that I was in 2019 Alabama and not 1960s Alabama as I swiftly made my way back to the safety of the group.  However, the fear doesn’t end at the Alabama state line.  In fact, I have been shocked at the bold acts of white supremacy in “progressive” places like Washington, DC, New York City, and California. Despite the terror that white men in hoods visited upon black communities, the fact that black bodies -- like Trayvon Martin’s -- in hoodies are the ones that illicit fear, trespass, and guilt signifies the vitality of the white supremacist imagination. I feel fear because although “safety” and “safe space” is so important to white communities, “safety” and “safe space” is often denied for black bodies.

Although I wanted to use this space to candidly share as a black man in the United States, I do not want to end in fear.  There is a quote on the wall of the National Memorial for Peace and Justice that reads:
For the hanged and beaten. For the shot, drowned, and burned.  For the tortured, tormented and terrorized.  For those abandoned by the rule of law.  We will remember. With hope because hopelessness is the enemy of justice.  With courage because peace requires bravery.  With persistence because justice is a constant struggle.  With faith because we shall overcome.

Indeed, I do have faith that we shall overcome when we dare to be proximate to one another across the race line.  When white people fight white supremacy within themselves and their communities for the sake of racial justice.  When African-Americans and Jewish-Americans join together in solidarity against racism, antisemitism, and any other type of -ism because we firmly root ourselves on the side of liberation and freedom.  We can dare to hope for a brighter day when we courageously face our past, be honest about our present, and unshakably plant ourselves on the side of freedom.

Rev. Isaac Lawson supports and resources clergy, congregations, and associations of the South Central region in their efforts to live the love and justice of Jesus in their locale.  Contact him for support with: Pastoral Transitions Committees on ...