How To Improve Sound in Your Video

How To Improve Sound in Your Video 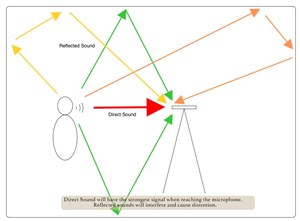 Sound travels in waves at a rate of more than 1100 feet per second. In an 18 foot room, a sound wave will travel back and forth between the walls 60 times in 1 second. Now consider that sound travels in 360 degrees from the source and is three dimensional. So ceilings and floors are reflecting sound as well. Factor in differences in distances between walls, the floor, the ceiling, furniture, decorations, etc. and it is easy to understand how sound waves can collide and interfere with each other, creating distortion, echoes, and unwanted noise. And let's not forget that the inspiring message you spent hours composing and are now speaking toward a microphone is not the only sound bouncing around the room.


So how do we get a clean audio recording for a video?


First, get rid of as much background noise as possible. Stand quietly in your recording space and listen. Are there noises you can stop? Can you turn off fans and environmental systems while recording? Choose recording spaces that are far away from background noise like street noise or busy offices (remember, worship online does not have to happen in a sanctuary). Also consider the size of a room. Because sound travels fast, and distorts as it travels, large rooms create cavernous sounds full of reverberation. Smaller rooms do not distort sound as much. Also think about timing; perhaps early morning or evening recordings may offer quieter moments for recording.

Improve your vocal performance. Like anything, speaking to a live stream or recorded video requires practice. The more consistent your level or volume during a performance, the better quality the sound will be in the final product.
Understanding microphones
Microphones are designed to collect sound waves using only a portion of the space around them. Think of a flashlight again. The beam points in a direction, but spreads out from the bulb in a shape usually like a cone. Nothing behind the flashlight or outside the cone gets illuminated. The space around a microphone that is the "good space" is called a polar pattern and each type of microphone has a different pattern.

A general rule: the closer the microphone is to the source, the better the sound. There are two factors working here. First, the sound that leaves your mouth immediately starts to decrease in volume as it gets further from you. The sensitivity of microphones decreases as the subject is further away. So moving away from a microphone decreases the quality of the recording exponentially (see the video below demonstrating this). “Turning up" the volume doesn’t work because it increases all sounds, including the reflected and background sounds. In most cases, a mic positioned more than 2m (6.5 ft.) from a subject will pick up more ambient noise than you want in a recording making it difficult to adjust the recorded sound later if needed. Ideally for capturing speakers, the mic should be 6-12 inches from their mouths. NOTE: Some microphones over-emphasize low tones when the speaker is too close, usually within 6 inches (this is called proximity effect). This can change the overall quality and make the vocal sound too deep and unnatural (you can hear this is the demonstration video).

So what do we do with our limited equipment?

Take your phone out of its case. Cases redirect the sound that reaches the microphone. Without a case, phones can get more direct sound.

Consider external phone mics. These plug into a camera, phone or tablet and work better than the native microphone. They are relatively inexpensive and can greatly improve audio. You can get a lapel microphone for around $20. Some nicer shotgun microphone which mount on a camera or phone can be found for around $50. Be sure to check the connectors to make sure it will work with your device!

In a pinch, consider using an improvised reflector. This is a surface that reflects the most direct sounds straight at the microphone, and helps block sounds from other directions. It can be a piece of cardboard or even a book standing beside phone. You can hear how well this technique works be cupping your hand around the back of your ear. Listen for how much more clear a sound is when you have this improvised reflector behind your ear.

Finally, test your video space and listen to the recorded sound. Your ears are more powerful than most microphones, so what you hear when recording is not what the microphone captures. Always run dress rehearsal to work out the problems in your recording.