Getting Personal - A Devotional on Race

Getting Personal - A Devotional on Race

“The spirit of the Lord is upon me, because he has anointed me to bring good news to the poor. He has sent me to proclaim release to the captive and recovery of sight to the blind, to let the oppressed go free.” (Luke 4:18) 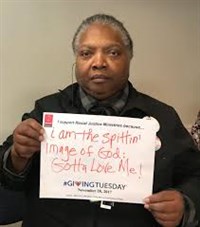 i am often ashamed that i do not know more about the racial history of this country. i think i know enough, and i have, until lately, been very fond of saying, “i am no expert.” i have understood, on an intellectual level, the statistics that reveal black and brown bodies incarcerated in far greater numbers than whites, prisons, even some of those that are state run, using those black and brown bodies for profit, schools with high populations of black and brown children look like prisons and factories inside and out.

In the midst of all of the evidence that has swirled around me since i’ve been old enough to remember, these statistics were just one more thing happening to black and brown bodies. Yes, the always life-threatening problems of institutional racism were, of course, my concern, and there were, it seemed, other concerns that touched me more personally: my family today appears to be well and not in danger of incarceration, and the children all seem happy in their schools or are being home-schooled.

Like many of us, i have been caught up in the whirlpool of recent attacks on trans bodies, on immigrant bodies, on LGBTQ bodies, even on white allies' bodies as they are injured standing in solidarity with my black body. Will i be able to answer Jesus' call and have a personal, hands-on involvement in the fight to dismantle mass incarceration and prisons-for-profit? 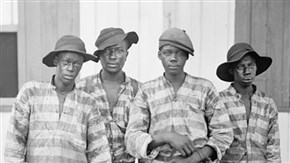 As a member of the MACUCC Racial Justice Ministry Team, i was asked to view a 90 minute video "Slavery by Another Name".  As i said when discussing it with other members of the team, “i was triggered immediately and throughout.” At first it was the imagery; then, it was the utter gall of a group of people “disenfranchised” by the end of slavery to conceptualize a way to continue it, as it certainly has to this day. But in the end, it was a personal link that undid me: the thought—unproven as yet, but i and my family are now digging deeper—that this happened to my family, to me.

My father’s grandparents were slaves in North Carolina, something we’ve all known all our lives. When slavery ended, and at the first census taken after that, his grandparents were still children. By the time they appeared together in a census, 1900, with 11 of their 12 children (all 12 had been born living), the oldest son could not be found in the Federal census; in fact, none of the 5 older sons, except for Russ, who stayed at home working the farm with his father, will show up on a Federal census again until 1940. Family stories say simply that “they worked in the coal mines”. Convict leasing? i have no proof, but the correlation of time when there is no record of them is scary. And i’ve held in my hand the record of my aunt selling a large parcel of land to the County to get her nephew released from jail and out of North Carolina. Away.

And what i see is that we—my family—was dispossessed, as Ta-Nehisi Coates said in Between the World and Me:
"We were black, beyond the visible spectrum, beyond civilization. Our history was inferior because we were inferior, which is to say our bodies were inferior. And our inferior bodies could not possibly be accorded the same respect as those that built the West. Would it not be better, then, if our bodies were civilized, improved, and put to some legitimate Christian use?”

Sitting in my black body, i cannot see mass incarceration of black and brown bodies as “legitimate Christian use”, and my siblings, i can’t image that you do either. The MACUCC has passed a resolution of Christian Conviction to dismantle discriminatory systems of mass incarceration in Massachusetts. The resolution states that “Jesus calls followers to ‘visit’” and Paul urged early Christians to “remember those in prison as if you were together….”

Siblings, i believe Jesus is calling us to more. Luke says we are “anointed…to let the oppressed go free.” The resolution offers steps that we can take as congregations and as individuals, and i encourage you to dive into them with me. Has your congregation engaged in racial justice training? Is it time for us to remind our legislators that we have not forgotten our incarcerated siblings? Or maybe a little fire is needed. i recommend your watching "Slavery by Another Name" or reading the book of the same name by Douglass Blackmon. OPEN your copy of The New Jim Crow if you haven’t yet. Have a reading party and read and listen to Claudia Rankine’s Citizen. Even with our social justice plates overflowing with things we need to clear, please listen for this call.

Photo from "Slavery by Another Name", the documentary.
Ivy Tillman is a member of the First Congregational Church, Amherst, UCC.

Ivy Tillman is a member of the First Congregationl Church, Amherst, UCC.