5/4/2017 - by: Pamela Arifian - Environment
Share
The People’s Climate March on Saturday, April 29th did not disappoint. There were many actions leading up to the big day, including lobbying at Capitol Hill and direct actions. I arrived in Washington D.C. on Thursday evening, and spent Friday engaged in a teach-in, supporting a direct action, and engaging with youth. Here’s my story:

“It Takes Roots to Weather the Storm” – Friday, April 28 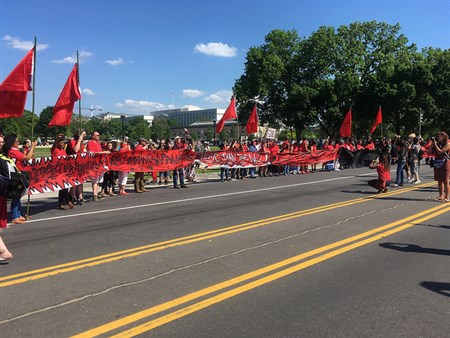 On Friday, I witnessed a direct action called Earth’s Red Line (#earthsredline) that took place in the middle of 3rd Street and the National Mall with the Capitol Building in the background. The action was organized by a coalition of grassroots organizing and relationship building groups engaged in growing power through local infrastructure and rooted in solutions for a just transition from an extractive to regenerative economy: “#ItTakesRoots to #GrowTheResistance is a multi-racial effort led by women and gender-oppressed people of color and Indigenous peoples on the front line of racial, housing, and climate justice across the country.”

The group, dressed in red, was organized into blocs of different contingency groups, united in their mission to defend our planet, protect our people and communities by forming a red line that cannot be crossed (while also acknowledging the damaging history of redlining communities). The blocs included: Indigenous Peoples, Appalachian, Veterans, Youth, Food Sovereignty, Feminist, Gender Justice, LGBTQI, Immigrant Rights, Black Struggle.

I was honored and privileged to serve as a marshal for this action, along with a group of folks organized and trained by Resource Generation earlier that day. At the teach-in, we learned about how our race, class and wealth privilege, which has buffered us from climate and economic injustice, can be used to support and amplify the communities who are most impacted. We learned that allyship is not a static identity, it is a practice.

As allies, our job as marshals was to create safe passage on both sides of the street that would be shut down for the action. We created a line holding hands and a red banner between us to block traffic, and we remained silent to allow the attention and focus to be directed to the message of the frontline communities. We faced the ire of the motorists who leaned on their horns, yelled angrily, intimidated us by driving right up to our line and braking just before impact, and in one case, driving right under our outstretched banner. Once the police showed up, to respectfully and graciously take over traffic control, we were able to support the action behind us as witnesses.

Each bloc had an organized message that included street theater, music, and dance, in a way that captured the struggle of that particular group, and why climate justice action matters to them. Each bloc had a red banner that was tied to the next, symbolizing the connected struggles on the forefront of climate, racial, economic, Native and gender justice. It was a powerful action that made clear the interconnected issues and interdependent solutions of the climate justice movement, and set the stage for the People’s Climate March the next day. 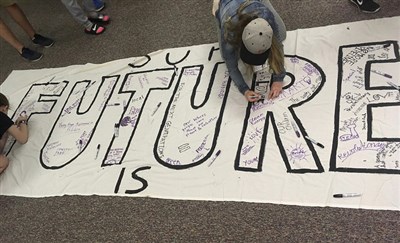 My participation in the Earth’s Red Line action precluded me from hearing the speeches by some of the youth plaintiffs who are suing the federal government for lack of action on climate change. I did get to participate in a breakout workshop for high-school students on breaking through barriers and building power. Led by youth educators with the Alliance for Climate Education, the workshop highlighted some of the perceived and real barriers that youth face in their engagement on climate justice action, and explored best practices for breaking through those barriers and engaging in ways that are authentic to them. It was inspiring to hear from the youth about the actions they are already engaged in, from water protectors at Standing Rock, to building Earthship solar passive houses, to internships with food sovereignty organizations and more. They recognized and celebrated that there is a place and role for each of us in building the future we want to live in.

Finally, right? On the hottest April 29th in Washington D.C. history, approximately 200,000 people (joined by at least 100,000 or more in 350 solidarity marches in cities around the world) marched from the National Mall to the White House. This mobilization brought diverse contingents of people together, united in the need to protect our climate, create jobs, and build a more just world.

The marchers were organized into eight contingents including: The Protectors of Justice bloc led the march, rightfully so, since they are bearing the brunt of destruction and pollution resulting from our extractive economy, and they are hit the hardest in extreme weather events. I marched with other UCC folks in the “Keepers of Faith” bloc, further down the lineup.
I was grateful for the grounding and sending-off that was offered in an ecumenical service of prayer before we gathered in the March lineup. The service was surprisingly emotional for me, and I was grateful for the opportunity to connect with some familiar faces from the 2014 People’s Climate March in NYC. The UCC group joined groups of Muslim, Jewish, Evangelical, Buddhist, Quaker, Humanist, Lutheran, Unitarian, Hindu, and more, united in our common call to care for the earth. Shout out to Greenfaith’s team, led Rev. Fletcher Harper, for organizing the Keepers of Faith bloc, and to Rev. Brooks Berndt, UCC Minister for Environmental Justice, for organizing the UCC hub, and to Rev. Jim Antal, MACUCC Conference Minister for his leadership, and to all of the organizers who took part in weekly calls, organized buses and the myriad logistics involved in making this bloc successful – thank you!

Marchers definitely brought their sign game. The People’s Climate March Flickr account gives a great visual representation of the day, including some of the best signs, puppets, parachutes and crowd shots that capture the day. I included some of my personal pictures in the UCC Northeast Environmental Justice Center Flickr as well. Many UCC folks carried a sign that read “Be The Church: Love Your Neighbor. Care for the Children. Protect God’s Creation.” The sign reflected the Three Great Loves, a new campaign that will be introduced formally at this year’s General Synod.

There was great representation from CTUCC folks, including some members of the Environmental Ministry Team, and the former directors of Silver Lake Conference Center, Tim and Anne Hughes. For those that were in D.C., or who marched in one of the CT-based solidarity marches: thank you for marching!

What I love most about this particular march, and its predecessor in 2014, was the sense of unity and celebration of diversity. Despite the oppressive heat and humidity, the delayed start, and close proximity of all of those sweaty bodies, I witnessed only kindness, caring, a sense of joy and purpose, and of acceptance and affirmation of our identities and reasons for being there. People were sharing their snacks, smiling at each other, singing and chanting together, participating in beloved community. We were not setting aside our differences for the moment; we celebrated and appreciated them, and recognized their essential roles in the movement.


Moving Forward – Beyond the Moment

The moment of the PCM has passed, but the movement continues. Showing up for climate justice means showing up beyond the specific action. It means supporting and actively building long-term relationships and sustained power. It means educating each other, preaching about climate justice, and engaging with local justice organizations, lobbying our legislators, and of course, running for office on a platform rooted in the solutions to these issues, and much more.

I encourage you to visit the websites and social media pages for the various groups that were leaders in the actions of the week and day, including Indigenous Environmental Network, Climate Justice Alliance, Grassroots Global Justice Alliance, Beyond the Moment, and more. Find out what they are doing and why, support them with your resources, share their stories, get involved in local campaigns, build a network of support in your area. As the organizers of the PCM say, “To Change Everything, It Takes Everyone”
* “Frontline communities” are the peoples living directly alongside fossil-fuel pollution and extraction— overwhelmingly Indigenous Peoples, Black, Latino, Asian and Pacific Islander peoples in working class, poor, and peasant communities in the US and around the world. In climate disruption and extreme weather events, these communities are hit the hardest.