The enormous witness that turned out in solidarity with the Standing Rock Sioux water protectors to fight the Dakota Access Pipeline was successful primarily because of its firm foundation of prayerful, peaceful resistance.  A few days ago, on January 3rd, an overwhelming number of people flooded the phone lines and forced the House Republicans to withdraw the Goodlatte Amendment that would have gutted the Office of Congressional Ethics. When we join together, our power is amplified.

The new administration includes Cabinet nominees in top positions who are known climate change deniers and friends of the fossil fuels industry.

For those on either side of the political divide who are dismayed, discouraged or concerned about the threats this new administration encompasses to our planet and our most vulnerable communities, we must not let this moment pass. We cannot afford to sit and wait for the next election to make our voices heard.

It is imperative that we show up en masse to bear witness, and to show the new government that we are still here, we mean business and we are not going away. 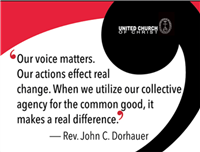 “The first 100 hours of the new presidential administration will mark the start of a new era in the climate justice movement - a time that will require courage, resilience and faith. It is a moment to ground ourselves in the resources of our faith traditions that can help us process our grief, our anger, and our fear, deepen our connection to spiritual resources that speak to this moment in history, and equip us with the hope and strength that will sustain us as we bear witness to the needs of the world and its people.” From The People's Climate Movement: Multi-faith Vigils in the First 100 Hours guide.

You are invited to join faith communities across the country in this important work by organizing a vigil within the first 100 hours of the new administration between Friday, January 20th and Tuesday January 24th.

The UCC is responding to this call.

The UCC Northeast Environmental Justice Center and Silver Lake Conference Center are partnering with others to organize a vigil in Salisbury, CT. Specific time, date and location TBD.

The CTUCC would like to partner with others to organize a vigil at the Capitol in Hartford on Monday, January 23rd. Can you help?

Organizing a vigil can be easy with the right group of people to share tasks. Greenfaith makes this even easier by providing a step-by-step toolkit, along with resources such as sample prayers from diverse traditions, social media posts, flyers, press releases, etc.

The vigils can be as long or short, structured or not, large or small as the organizing team decides. Each team can decide on their own goals, but Greenfaith and PCM want to be clear about the following goals:   Each vigil organizing team will have their own goals and variations of roles and tasks, but generally speaking, following are the roles and tasks that need to be accomplished by the organizing team for a successful vigil:
This is a lot for one person alone, but get a few others involved, and it’s much less daunting, and the impact could be great!

This is a movement-building action. We are showing each other that we CAN stand together. We are building momentum, creating community that is ready to act when needed. Please join us.

Find or register a vigil at www.peoplesclimate.org

“To change everything, it takes everyone” – Peoples’ Climate Movement

Contact Pam Arifian to help find, organize and publicize a vigil in your community.