Extravagant Hospitality: One Year with our Afghan Refugee Family

Extravagant Hospitality: One Year with our Afghan Refugee Family 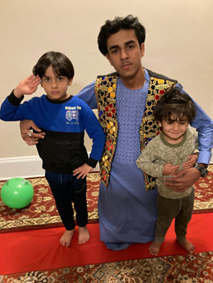 It has been about one year since we welcomed our Afghan refugee family to their new home in Middletown, CT on December 4, 2021. We welcomed the mom, dad and four boys, and later the arrival of a nephew. They are all in good health and happy to be safe in Connecticut. They are here because the dad assisted the U.S. military, so when the government fell to the Taliban, he and his family were in great danger.

The twins are thriving. They were born in New Jersey when the family was at the camp at Ft Dix. The good news is they are U.S. citizens. The mom is convinced that because they were premature and needed expert care, they would not have survived had they been born and stayed in Afghanistan. On December 4, one was in the Yale New Haven Children's Hospital NICU with RSV, and each boy weighed about 6 pounds. Today they are vigorous 20 pound one-year-olds and are crawling and cruising. With contributions we were enable to purchase car seats, Pack and Plays, a baby corral, and formula.

The 2-year-old was not speaking when he arrived, but now he is putting together phrases in both Pashto and English. He is an enthusiastic boy who always greets visitors with a fist bump or a high five. He will start pre-school in 2023. 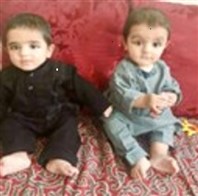 The 5-year-old boy attends kindergarten at the local elementary school. He is learning English rapidly. At home he likes to show off his acrobatic skills, which include standing on his head!

A 15-year-old nephew joined the family in August 2022. He came separately as a 13-year-old unaccompanied minor in the August 2021 airlift, and after time in refugee camps in Qatar, Germany, and Virginia, came to Connecticut. He is a 10th grader at the local high school. He has been very helpful with childcare and translation, as his English is quite good.

The mother has her hands full with 4 children ages 5 and under. She is an expert cook and seamstress. She has rearranged the apartment the Afghan way and keeps a neat household. She has been studying English and preparing for the driver's permit test.

The dad is also studying English. He obtained his driver's license in May 2022 and was hired as a landscape laborer in Durham, CT.  He is a diligent worker and is well regarded by his employer and co-workers.

Challenges remain. The family now pays all of their bills, but money is very tight. Cash assistance from the state ended in October. The dad was laid off from his landscaping job in mid December, and it will not resume until March 2023. Meanwhile he will study English and find other employment. The mom is making pillows and cushions (orders can be sent to Kristin at (kriscoombs@comcast.net). A donated very old car died in October, and a replacement used car had to be purchased. Fees for the nephew's asylum application and applications to extend the family's legal residency and work permits must be paid. The nephew is planning to start a part-time job to support the family.

The family's resettlement would have been impossible without the unflagging efforts of our eight volunteer teams. They are Medical, Transportation, Housing, Childcare/Children's Education, Acculturation/ESOL/Translators, Employment, Finance, and Immigration, plus our Administrator. We have enjoyed working with this wonderful family and learned much from them. The outpouring of help has been amazing! The family feels lucky and extremely grateful.

Mark Pierce is a retired physician and medical researcher, and Team Leader of The Valley Stands Up Refugee Project of Essex, CT.  He and others started Essex Church's Co-Sponsorship group with Integrated Refugee and Immigrant Services of New Haven in...