5/2/2018 - by: Myriam Hernandez Jennings - Justice and Witness
Share
Creating partnerships to promote love and respect between domestic workers and their employers makes sense. And if these partnerships also promote social and racial justice to improve the treatment and safety of these domestic workers, that is an added bonus. The Massachusetts Coalition of Domestic Workers (MCDW) celebrates its new partnership with the MACUCC Immigration and Refugee Justice Task Team. Together we will engage domestic workers and their employers in the 365 churches that are members of the MACUCC. 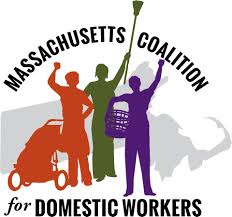 The MCDW was founded in 2010 by several organizations and today is led by a Steering Committee composed of the Brazilian Women's Group and the Dominican Development Center, in close partnership with Greater Boston Legal Services and the New England Jewish Labor Committee. The MCDW was the driving force in passing the MA Domestic Workers’ Bill of Rights (BoR) in April 2014. The Domestic Workers BoR passage has been the Coalition’s proudest accomplishment thus far. It established important labor standards, and granted basic protections to nannies, housekeepers, and other in-home caregivers. Specifically, the Domestic Bill of Rights amends Massachusetts state law to guarantee basic work standards and protections: 24 hours off per each 7-day calendar week; limited days of rest; parental leave; protection from discrimination, sexual harassment, illegal charges for food and lodging, eviction without notice and retaliation for asserting wage violations; notice of termination; and a means of enforcing these standards.

The MACUCC Immigration and Refugee Justice Task Team works to uphold the commitment and calling of our faith to affirm that everyone, regardless of national origin, has basic human rights including livelihood, family unity, and physical and emotional safety. The Judeo Christian faith tradition is grounded in the stories of immigrants.  This tradition calls its members through its sacred scripture to welcome the stranger, to love one’s neighbor as oneself, and to treat the immigrant as a citizen among us, because once we were immigrants in a foreign land. This is a fitting calling for our budding partnership.

Our role, as partners, is to energize and support domestic workers in developing their leadership skills and organize to change the condition of exploitation, sexual abuse and harassment, and racism that they confront in their workplace. Through this partnership, and working in close collaboration with domestic workers’ employers, we all can create space for honest conversation and change the negative environment that portraits immigrants as criminals. The current anti-immigrant environment motivates workers to fight back against racism and all the "isms". As partners, we can develop a close collaboration with all MACUCC church members to combat racism and respond to the negative political environment that impacts immigrants.

The MCDW looks forward to this partnership and invites all churches to host “Know Your Rights” for domestic workers and their employers. We also invite all churches to support two events that are coming up. The first is the Domestic Workers Celebration Day at the State House Great Hall on Thursday, June 14th, 2018 from 9 AM to 1 PM. More information can be found here.
The other event is a fundraising event during the month of May, when we celebrate Mother’s Day to support MDCW efforts. Employers will have an opportunity to donate on behalf of a domestic worker who made a difference in their family life by taking care of their loved ones. For more information, visit MCDW’s website www.massdomesticworkers.org.

In partnership, the MACUCC Immigration and Refugee Justice Task Team and the MCDW have the potential of creating a more compassionate society where domestic work is respected and dignified, while our loved ones are taken care of with those same values.

Myriam Hernandez Jennings is Director of Policy & Organizing for the Massachusetts Coalition of Domestic Workers.