10/11/2017 - by: Khamis Abu-Hasaballah - Justice and Witness
Share
I confess. I never felt hate or discrimination towards me. Perhaps it’s my oblivious nature to these things, or it may be because for every apparent feeling of hatred directed at me, I have felt overwhelmed in a sea of love and caring from everyone around me.
One of my children, however, was not so lucky. On more than occasion he received derogatory remarks from a kid on the bus blaming him and Muslims for 9/11. Of course, 9/11 happened when he was barely a toddler, yet he felt – as many Muslims did – that he was held accountable for that horrendous event.  As a parent, I felt the need to do something that could have everlasting positive impact. That’s how I, along with my wife and a couple of friends, founded the Farmington Valley American Muslim Center (FVAMC) in 2013.  As a principal of FVAMC, stories of members being hated or ostracized simply because of who they were, started to come to my attention. 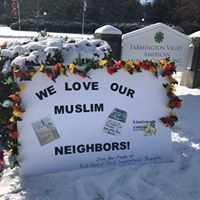 This of course became worse during and after the 2016 presidential election, where the Muslim community found itself under constant attacks from elected officials in the highest level of government. But America refused to succumb to such vilification and outright discrimination of an entire community. Our small community of about a hundred families in the beautiful Connecticut Farmington Valley received much love and support all along - from letters of support, phone calls and emails, to visits from non-Muslim neighbors and residents from all over the State. The Friday following Tuesday November 8th, for example, over 20 priests from Episcopal churches throughout Connecticut joined our Friday Service as a show of solidarity and unwavering support. Neighbors joined a community meeting at our Center that Friday evening to express their support and ask what they could do to help. In the wake of the Muslim travel ban, neighbors left posters and  messages of support on our front lawn. Through all of this, everyone was genuinely concerned and wanted to help.

“How can I help?” was the question we most often heard. We know that these attacks on and suspicions of Muslim communities are based on ignorance and fear.  We also know that in order to enlighten people and combat fear, we must educate. The most important factor in educating is the knowledge that the majority of Americans have never met a Muslim and people are likely to fear the unknown. So, when people asked how they can help, I knew the answer; meet Muslims, learn about Islam, and help educate others.

This was our motivation to partner with our friends at First Church Congregational 1652 to put together the Spirit One Conference as a way to educate and enable our fellow Americans to meet Muslims. It’s our way of giving back. This is not a conference just about Muslims. Attendees – Muslims and non-Muslims alike - will bear witness to the common threads that tie us together as faith communities, regardless of our tradition. By learning about the faith of others at this conference, we are affirming our own faith in ways that no words or religious service can capture. So, if you are able to attend, even a part of the conference, I guarantee you will not regret it. We will have world renown, dynamic speakers covering a wide array of relevant topics. Come be a witness.

Co-Founder and President of the Farmington Valley American Muslim Center.  Co-Founder of Madina Academy, Connecticut’s only full-time Islamic school.  He is Assistant Vice President for Research at UCONN/UCONN Health, where he leads the IT Services ...