Symbols have a power that can be used for good or evil. Some shame us and leave a stain on our collective conscience. The best symbols help us remember our past and nurture us when we struggle in dark times.

When Confederate memorials are renamed or taken down, which has happened in New Haven, with the renaming of Yale University’s Calhoun College this year, and New Orleans, with the recent removal of two Confederate war memorials, it’s a small but real victory for the 4 million black people held in bondage and all those who fought to eradicate our country’s “original sin.”

The closest thing Hartford has to a Confederate memorial may be a plaque currently affixed to a downtown Hartford office building at 777 Main St. It marks a campaign stop by Stephen A. Douglas, the slavery apologist who ran for the presidency in 1860 against Abraham Lincoln. At best, it is a thoughtless gesture; at worst, an insult to freedom fighters and their descendants.

It’s not enough, however, just to reject these offensive symbols. We must continue to reclaim images that can teach and inspire. There are many such stories waiting to be uncovered and passed on to the next generation.

One such story took place not far from the plaque to Douglas on the grounds of Hartford’s Center Church, The First Church of Christ. On May 18, 1843, Frederick Douglass, an African-American abolitionist, was allowed to speak, but not in the church. 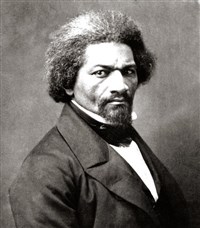 Douglass was a powerful man with a just cause. In his efforts, he was faced with insurmountable obstacles. Many towns rejected his cause and closed their doors to him and his meetings. Hartford was not the exception.

But perhaps when all hope had been lost for an appearance in Hartford, he was able to hold meetings as he reported, “under the open sky ... under the eaves of the ‘sanctuary’ ministered unto by Rev. Dr. Joel Hawes.” Notice, Douglass was not allowed to preach from the pulpit, in the meetinghouse; he was given an opportunity to speak outside.

Although this fact of Douglass being only allowed to speak outdoors is difficult for us to explain to our church school children, who are mostly children of color, we are now challenged by history to do better. We must reclaim the space where this great man stood, to remember what he believed, “Where justice is denied, where poverty is enforced, where ignorance prevails, and where any one class is made to feel that society is an organized conspiracy to oppress, rob and degrade them, neither persons nor property will be safe.”

We have the responsibility to recognize and celebrate that a great man stood on the grounds of the oldest church in Hartford and the minister who allowed him to do it. Even though the Rev. Hawes was an abolitionist, he was under social pressure to keep arguments over slavery out of the church. He was undoubtedly nervous even allowing Douglass to speak on church grounds. And then, I can only imagine the Rev. Hawes retiring to his prayer room to ask God to preserve his job.

That small act of courage gave us Frederick Douglass and, I, as the current minister of this historic church, have a responsibility to mark history proclaiming that transformation is often achieved by small acts of courage.

Douglass and his companions were the resistance of their times. It took them decades, but they overturned an entire national economic system based on slavery. They also beat the political machinery that penalized, defended and expanded an outrageous 250-year crime against humanity.

At Center Church, we know that our history is rich and meaningful. We also know that there are aspects of our history that are painful and shameful. Nonetheless, history is graceful and it provides us with opportunities to assess the past, so that we may change the future.

That is why we have organized the Frederick Douglass Memorial Dedication on Thursday at 6:30 p.m. at Center Church at 675 Main St., on the corner with Gold Street. The public is welcome.

The Rev. Damaris Whittaker, D.Min., is the senior minister of Center Church Hartford. Steve Thornton is the director of the Shoeleather History Project.

This post originally appeared as an opinion piece in the digital edition of the Hartford Courant.

senior minister of First Church of Christ, UCC, in Hartford