A Reflection on People vs. Fossil Fuels

A Reflection on People vs. Fossil Fuels 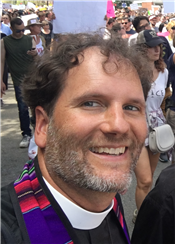 These are parched days.
We thirst for something to quench the chaos.
Our waters, soils, and air are in turmoil. And we long for impactful ways to counter our climate’s unraveling. We also thirst for embodiments of authenticity. We crave spaces to be that matter. Perhaps even more so due to COVID’s continued grip that keeps us too often siloed.

So when a fellow co-conspirator in the movement summoned, I responded (there is power in the personal appeal). At fellow pcusa-reverend abby mohaupt’s beckoning, I traveled to Washington, D.C. to join in the wider invitation made by frontline Indigenous leaders for a week-long, embodied witness of thousands for climate justice, under the banner of People vs. Fossil Fuels, Oct. 11-15, 2021. And from the moment I arrived in aptly if not ironically named Freedom Plaza (is anyone free if all are not?), my newly liberated and quenched heart knew I was in the right place.

Beyond plunging into a once-again-formed-community including beloved multifaith climate leaders (Marla Marcum, Fletcher Harper, Colleen Earp, Liv Thomas, Emma Brewer-Wallin, abby mohaupt, Fred Small, Nathan Phillips, Jim Hayes, Bill McKibben and others), it was deeply humbly and inspiring to suddenly be in the company of some of the most dedicated and fierce loving climate activists who are regularly putting their bodies on the line to protect the sacred. Such leaders as Taysha Martineau, Siqiniq Maupin and Dawn Goodwin who have been rising up for years against the evils of Line 3’s violation on unceded Anishinaabe lands in Minnesota, and other climate injustices, are self-described as people who “come from the trenches in the fight against fossil fuels – from fracking sites and oil wells, to pipelines and refineries, to plastic plants and more, we are impacted Indigenous, Brown, Black, and low-income communities living on the frontlines of this climate emergency”.

Their message? The government of the United States must immediately declare a national climate emergency and launch a just, renewable energy revolution. Climate chaos stems from human greed but is fueled by the ongoing lies and violence of fossil fuel corporations. The Biden-Harris administration has the power to stop the destructive dirty fuel pipelines that snake uninvited across the sacred ancestral lands of indigenous communities who suffer the most from both climate change and the brutality of police in places like northern Minnesota, North Dakota, and Louisiana – but continue to fail to act. Enough is enough, and the people and the sacred waters that are life demand them to act now.

Under the prophetic leadership of these frontline prophets, and to amplify their witness, I joined a powerful stream of 654 others who got arrested throughout the week for civil disobedience in the face of this massive civil injustice. Our crime was officially described by police as “incommoding.” Apparently, our peaceful yet powerful collective presence standing on the sidewalk in front of the White House (a house that sits on unceded, stolen lands lest we forget) while holding signs that demand our elected officials act more courageously for climate justice, was interpreted as “giving inconvenience to or distress to or disrupting” others. The painful irony was not lost on us, as we heard impassioned, firsthand accounts throughout the week from our frontline Indigenous leaders about the relentless, heartless, shameful incommoding-distress the greedy corporate fossil fueled few are inflicting upon the masses. It was also clear to those of us with privileges (mine: white, cis-male, Christian, social security number), that the slight inconveniences experienced in getting arrested then released, pale in comparison to the ways our frontline Native siblings’ lives are being disrupted daily. Climate’s chaos exacerbated as “law” enforcement continues to bring down the violence of white supremacy on Native activists who are simply standing up for the basic rights of clean water, breathable air and a sustainable future for their children.

The title of this week’s action prompts the question, “what does it mean to be part of “the people”? We talk a lot in church circles about the centricity of community – but beyond household units or pods of kin (chosen or biological), the day-to-day realities in our overly western consumptive contexts often lack chances to see ourselves as more than individuals. Being part of the people requires radical solidarity. It means coming to grips with the truth that injustice to some is an injustice to all. It means when someone else’s sacred waters are being violently violated, our action is required.

Two People vs. Fossil Fuels leaders called out those of us gathered on the third morning before marching to the White House. They powerfully challenged us to show up. To remember we were not in D.C. as tourists, but as co-conspirators, and it was high time to boldly put our bodies on the line. “For those of you who have been longing to stand in solidarity with frontline Indigenous leaders, now is the time to show up! If you see an Indigenous sibling being approached by police, you place your body between them. If you are white, and you see a white activist slipping away from the action if things get heated, you go to them and demand they stay.” This forceful challenge still rings in my ears. Radical solidity is hard to embody.

To accompany this lingering challenge that unsettles me in a holy way, a powerful image remains with me. On the first morning of this week of action – the first ever nationally recognized Indigenous People’s Day – an immoral monument was prophetically tagged. The statue of Andrew Jackson on horseback that shamefully still stands in front of the White House, was newly coated in large red spray-painted letters that spelled out the warning, “Expect Us.” A monument to the one of the most deplorable presidents of this country who authored the Trail of Tears was marked with a powerful message from the movement for Missing and Murdered Indigenous Womxn, Girls and Two-Spirits, whose signature red-hand prints convey the message to all in power – “Respect us, or Expect us.” This message was directed at the Biden-Harris administration and all politicians who have the power to act – respect Indigenous leaders, listen to them, see them, do right by them or continue to expect their non-violent, prayerful and powerful showing up to disrupt and further incommode.

Refreshed by the incredible people all over Turtle Island rising up to powerfully speak truth to power, I left D.C. with both a quenched thirst and a renewed call. Will you join in the flow?  People of faith – people of compassion – let us all use the privileges we have to act in solidarity with these incredible leaders who are inviting us all back to a more loving, centered, grounded and faithful way of living in peace with others and our sacred earth. Call, write, pray, and demand that our national leaders act swiftly and boldly for climate justice and climate jubilee, now. Thank you for your solidarity and prayers. Water is life. This movement flows on. May it quench.

Rev. Rob Mark is the senior pastor of Church of the Covenant in Boston.