1/19/2018 - by: Wendy Vander Hart - Conference staff Justice and Witness
Share
The meeting began with the passing around of a relic- a button from the Poor Peoples Campaign march in 1968.  Fingers grasped the round blue button with the picture of Martin Luther King Jr. in its center as it moved from hand to hand.  We were meeting about the Poor People’s Campaign to plan, plot and praise a moral imperative drawn from the past but still inspiring future action.

Wikipedia notes that a relic can be a term for something that has survived the passage of time, especially an object or custom whose original culture has disappeared, but also an object cherished for historical or memorial value (such as a keepsake or heirloom).  In other words, a relic can be a dead marker of a dead past or a living keepsake of a living hope.

Lew Finfer was 17 at the time he received this particular relic.  He was in high school when he was invited to go to Washington DC for the launch of the Poor People’s Campaign.  For Lew that march was not a moment in history but a movement that set the course of his life.  He is now the co-Director of MCAN (MA Communities Action Network). 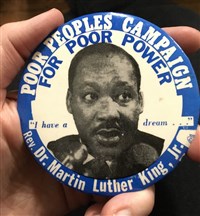 As I held Lew’s button in my hand I thought about the ways in which racial and economic injustice seem to be frozen in time.  A permafrost of cold, calculating systemic disease that permeates American society.  Here we are fifty years later working the same issues, in some of the same ways and expecting different results.

Our marches, sharing memes on Facebook and signing petitions can leave us disconnected from those most affected by injustice and have not yet proven to be very effective in securing real and lasting change.  Perhaps these ineffective actions are the kind of relics we need to leave behind.

As the leaders for the Poor People's Campaign tell us, history teaches us that successful movements’ essential first step is uniting those most affected by the problem. So, let’s try something different.

At the heart of change is learning how to give and take, how to listen, how to participate, how to hear the different other, interact and learn. These are skills to hone if we want to live the love and justice of Jesus.

Change happens in the process. Being present with another IS doing something. This Poor Peoples Campaign movement has relationship and stories, standing aside and along, at its heart. It will bring to the forefront stories from the margins.

To get new results we have to do something different.  The invitation to many of us from more privileged perches is to use our time differently by moving our social location and putting ourselves in new places.

So, imagine bringing food to a pantry you already stock or a community meal you already serve and striking up conversation. And from conversation inviting companionship, then leadership - amplifying stories to bring the margins closer together.

Join the local chapter of the NAACP and listen.  Contact the Tenants Association and ask how your church can connect. Find the local community organizing chapter and plug-in.  Imagine Jesus listening to the one with no coat, the prisoner, the hungry and do likewise.

For the ways of Jesus are not a dead marker of a dead past, they are a living relic of a hopeful future for all.