The Shaving Cream on Top

The Shaving Cream on Top

3/18/2015 - by: Patrick Cage - Justice and Witness
Share
Roughly a fortnight into my time with the MACUCC, Conference Minister & President Jim Antal and I struck a deal. Should ten Massachusetts UCC churches take up new conversations about divestment, he would get pied at Super Saturday. Well, last week, our Pie Thermometer maxed out at “10!” (hopefully our global thermometer will not), and as a result Jim’s fate is sealed.
“Throwing pies?,” some might cry. “Perfectly good pies? Food justice is too serious an issue to take such flagrant food waste lightly, even if the stunt is ‘for a good cause.’”

And I agree, absolutely. Some 49.1 million Americans are food insecure. And yet, 40% of the food produced in the United States wastes away in a landfill, enough to end hunger in our country some three times over. To acknowledge this inequality, our ‘pies’ will be made of shaving cream. Besides, ignoring food concerns when committing to climate action wouldn’t just be narrow-sighted, it would be counterproductive. Climate change amplifies every injustice, and this includes hunger. From Central Java to the California Central Valley, farmers already face climate-aggravated drought. As the temperature goes up, so do food prices, which spells hunger for the most poor. The fourth IPCC report estimates that, come 2050, some 75-125 million people will face malnutrition due to climate. 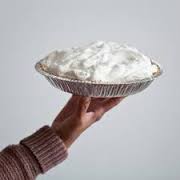 And this is precisely why we need fossil fuel divestment. Hearing Jesus’ call to feed the hungry (Matthew 25:36-40), we act to prevent further hunger tomorrow. We divest to reduce our complicity, refusing to profit from an industry that, in 2013, received $ 5.2 billion dollars in U.S. government subsidies through tax breaks for oil exploration– oil that cannot be burned if we want a stable adulthood for today’s children. What if this $5.2 billion went towards feeding those one-in-six Americans who are hungry? What if it established programs that ended hunger in our country? Divestment is about asking these questions and others, refusing to believe that we are stuck on the course of business-as-usual.

So why the pies in such a serious situation? To soften a stark conversation, we decided to bring employ a classic gag. Does this cheapen the issue? I can’t imagine that Jesus – who taught about the Kingdom of Heaven through confusing stories (Matthew 13:13-15), who danced and turned water into wine at weddings (John 2:1-11) – would think so. Sometimes the best way to start a Gospel, or to kick off a conversation about climate change, is with a slice of good fun.

Because Super Saturday is about how churches can be places of fun. In Philippians 4:4, the Apostle Paul writes, “Rejoice,” and then, in case you thought he was insincere, he adds, “I will say it again, rejoice!” Like our faith, justice need not always be solemn – we can sweeten the deal with our upbeat buffoonery. As UCC churches, we can take the divestment conversation and add a pie stunt as the whipped cream (or, in this case, shaving cream) on top.

So I hope you are going to Super Saturday, and are excited to rejoice with us at the end of morning worship, as we praise God actively with our hands, given to us both for doing good deeds – like divesting our portfolios – and flinging pies.

Patrick Cage is the climate justice intern at the MA Conference, UCC.

Patrick Cage served as environmental intern at the Massachusetts Conference, UCC for six months in early 2015.  He is a recent graduate of Yale College where he was an environmental studies major with a concentration in religion and the environment,