Be Careful What You Cut...

Be Careful What You Cut...

An article from the Children's Defense Fund 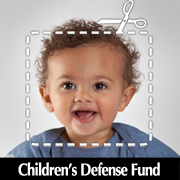 This is a year of stark political, economic and moral choices. When it comes to the federal budget, it’s critically important to remember that children did not cause the deficit. Those who did should be asked to pay to close it and not be rewarded with more tax breaks which will increase the deficit and shave already inadequate safety investments for children.

Children under five are the poorest age group in America, and one in four infants, toddlers and preschoolers are poor during the years of greatest brain development. If you believe as we do that Americans have more just and sensible choices like helping babies during their early childhood development years rather than helping billionaires who need not one additional material thing, then speak up and fight back. There should not be one new dime in tax breaks for millionaires and billionaires as long as millions of children in America are poor, hungry, uneducated and without health coverage. A nation that does not stand for its children does not stand for anything and will not stand tall in the future.

Join our Be Careful What You Cut campaign, and help us spread the irrefutable economic case for why cutting children from the budget now will cost all of us more later. It’s a simple calculation, really. Protect now or pay later.

Learn about the "Be careful what you cut" campaign and more about the Children's Defense Fund.