excerpted from an article 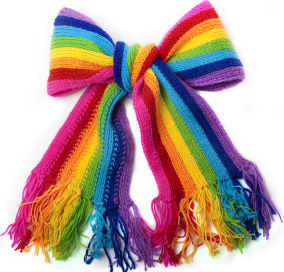 Scarves of varying patterns –– each sporting rainbow colors –– are being made to be given to Synod attendees who pledge to commit to acting against violence. "It could be talking with your school superintendent about bullying, volunteering at a women's shelter or writing to your senators," said Coons-Torn of the advocacy possibilities.

"So when someone walks up to you at General Synod and asks you about your scarf, you offer to give it to them if they will agree to take an action against violence," she said. "Then you can return to the display hall and pick out a new scarf."

Andy Lang, executive director of the UCC's Coalition for LGBT Concerns in Cleveland, expressed deep gratitude to Coons-Torn and scarf-makers nationwide "who've taken the initiative to conceive and launch this project."

"General Synod in Long Beach will be a seascape of rainbow colors, and an opportunity to renew our commitment to protect every youth whose life and health are endangered by bullying," said Lang.

Read the article in its entirety here.

Knitters, crocheters and weavers should send their scarves to: